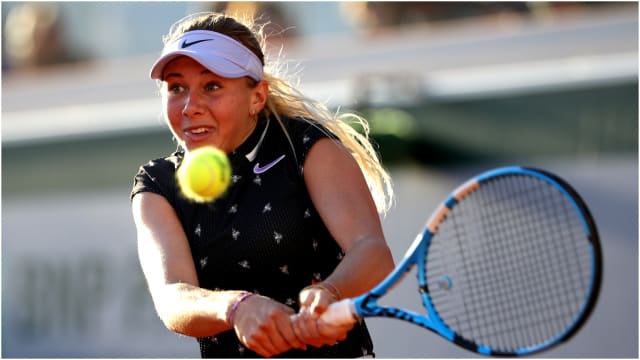 Amanda Anisimova is enjoying an outstanding run at the French Open, yet she would be willing to risk it all for a picture with rapper Drake.

Toronto Raptors super fan Drake, a constant feature of the NBA Finals, has garnered a reputation for 'cursing' sports stars by posing for photographs ahead of big events.

While the Raptors are still holding their own, heavyweight boxer Anthony Joshua was the latest athlete to be jinxed, posting a picture with the Canadian before losing to Andy Ruiz Jr.

Yet Anisimova would not turn down the opportunity to get her own Drake picture.

The 17-year-old American moved into the last eight at Roland Garros with a dominant victory over Aliona Bolsova on Monday, after which she was asked about her musical idol.

"Yeah, I would [get a picture]. I wanted to meet him for so long. It's okay - I'm not that superstitious."

Anisimova will play defending champion Simona Halep next, who also eased through on a day that saw three bagels across just four matches in the women's draw.

Leaning in. See you in the quarter-finals #everythingfromhereisabonus#RG19@rolandgarrospic.twitter.com/MwFQXKLPiT

Polish prospect Iga Swiatek, exactly three months older than Anisimova, was the unfortunate player who faced Halep on Monday, claiming one game as she was beaten in just 45 minutes.

Swiatek later confirmed she would now head back to school, but she hoped she would be able to learn from facing one of the world's finest.

"It's a good experience for me - and I'll remember that match," she said. "I'll learn from it, even though it lasted, like, 40 minutes."

Ashleigh Barty had too much for Sofia Kenin, winning 6-3 3-6 6-0, and can look forward to a day out of action. Her pastime? Watching more sport. The Cricket World Cup was on her mind more than the State of Origin, though.

"I kind of forgot about Origin, actually," she said. "But I think, more than anything, I have a day off tomorrow to watch a bit of the World Cup, which will be good.

"We'll all have a streaming site up there somewhere to keep an eye on it."

She will then return her focus to Madison Keys, who defeated Katerina Siniakova in straight sets.

Although Kenin and Siniakova landed two of the biggest results of the tournament when they dumped out Serena Williams and Naomi Osaka respectively, neither could reach the last eight.

But Kenin was positive, explaining: "Of course there are obviously a lot of improvements I can do. And I'm young, I'm 20, playing at the big stages. I think it's great, a great opportunity for me, just getting my name out there."

Siniakova added: "It's tough every time. Every match is different, and it showed in this match [against Keys]. I was really playing well these four matches and today I just wasn't solid enough for her."