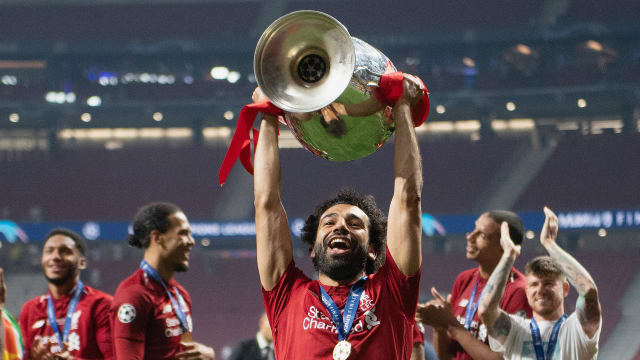 Mohamed Salah spent a moment looking at a picture of Liverpool's 3-1 defeat to Real Madrid in the 2018 Champions League final to motivate him ahead of their triumph over Tottenham.

Salah converted a second-minute penalty in Liverpool's 2-0 victory at the Wanda Metropolitano, and moments earlier he had been in the dressing room reminding himself of the pain he experienced in Kiev 12 months prior.

The Egypt international lasted 25 minutes of the 2018 final, leaving the field with a shoulder injury following a challenge from Madrid's Sergio Ramos, and he said the memory of that night drove him on as he took to the field against Spurs.

"I looked at the picture from last year before the game," said Salah.

"We were disappointed after the final and now we are back and have won it again, the sixth time for Liverpool. It is something great.

"I was very disappointed that I got injured and went off and we lost the game. It was something to motivate me to win.

"I didn't look at the picture for a long time. You can feel what you can beat so I just looked at it one time and said, 'Okay, let’s go.'"

Salah underlined the importance of Liverpool's defeat in Kiev even further by suggesting it was fate that the Reds would lose.

Asked whether he believed they were destined to bounce back and claim the trophy in 2019, he replied: "I do. Absolutely.

"Our job is more mental and you have to believe in yourself before the game. You could see the players; we were believing in ourselves in the game.

"I think everything happens for a reason and the reason for us to lose the final last season was to come back and win it again."

Looking ahead to 2019-20, Salah set his sights on achieving a first league title for 30 years to a set of fans who will believe the Reds can pip Manchester City next season.

Liverpool last won the league in 1989-90 but the sense of hope that Jurgen Klopp can end the wait to become Premier League champions has strengthened after the German delivered the first silverware of his tenure.

"It is good experience for us to win the trophy now and also last season we learned a lot."