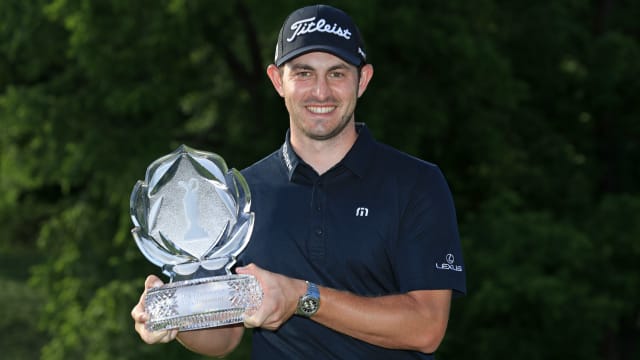 Cantlay was bogey-free in his final round and fired off eight birdies to capture his second PGA Tour title.

"It feels great," he said. "It's been a while since I've won, almost a year and a half, and being able to win on this golf course, a golf course that I really like and in front of Jack [Nicklaus] and making that putt on the last hole, I can't tell you how good it feels.

Patrick Cantlay has won @MemorialGolf with a 64.

It's the lowest final round by a Memorial champion.#LiveUnderParpic.twitter.com/SWb0JzJ81n

"It validates my confidence that I can play with the best players in the world. Beating a field like this on a big golf course like this, this is very similar to a major championship set up."

Cantlay finished 19 under overall, two shots clear of Australian Adam Scott, who closed the tournament with a four-under-par 68.

Scott nearly caught up to Cantlay after three consecutive birdies on the 14th through to the 16th hole put him two strokes off the lead.

2011: Winner of the Jack Nicklaus Award

Former world number one Scott was close to a birdie putt on the par-four 17th but the ball skirted just past the hole. He saved par but was unable to eagle 18.

Martin Kaymer, who was the 54-hole leader, finished fifth at 12 under following his 69, a stroke ahead of Hideki Matsuyama (72).

American superstar Woods (67) was a stroke further back as he highlighted the four-way tie for ninth position.

Woods opened the day with five birdies on the front nine, including back-to-back birdies on the second and third holes and again right before the turn on the seventh and eighth.

The 15-time major winner carded two more birdies on the back nine and a pair of bogeys to end the event.