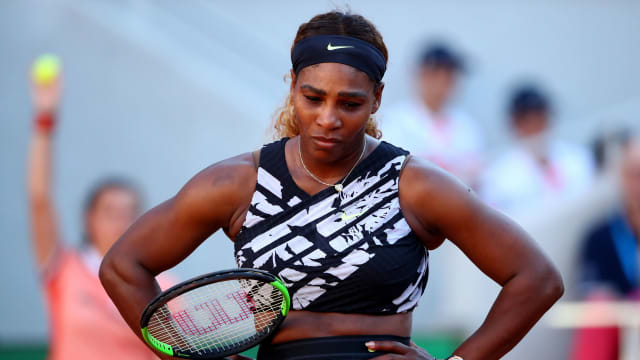 Serena Williams' wait for a record-equalling 24th major title continues after she fell to a 6-2 7-5 defeat to the impressive Sofia Kenin in the third round of the French Open on Saturday.

Former world number one Williams was pulled all over the court by high-quality groundstrokes from Kenin, who received a walkover in round two when Bianca Andreescu withdrew due to a shoulder injury in the opening set.

Williams, who has been struggling with a left knee problem, let out huge roars as she attempted to work her way back into the match.

However, despite having the crowd on Court Philippe-Chatrier firmly behind her, the 37-year-old was unable to turn the tide against her fellow American and remains one major title short of matching Margaret Court's all-time record.

In only her second main draw appearance in Paris, @SofiaKenin takes out 3x Champion Serena Williams 6-2 7-5.

Williams pulled out a couple of aces as she denied Kenin on three break points, but a sublime drop shot in game five saw her lose her footing and fall behind.

The 10th seed missed a chance to hit straight back and was two breaks down when her Moscow-born opponent wrongfooted her with an exceptional forehand into the corner.

Kenin thought she had the first set wrapped up when Williams produced a long return, but her serve was called wide. However, she staved off a break point and another fine forehand preceded Williams netting a return to surrender the opener.

The world number 35 broke to love at the start of the second set and kept a fired-up Williams - a three-time champion at Roland Garros - at bay to consolidate.

Kenin was whistled for kicking the mark left by a cross-court backhand that just clipped the line and set up a break point for Williams, who was soon back on serve.

Boos rang out when Kenin questioned another line call but she was in position to serve out the match after a sensational forehand return in game 11.

Williams miscued wide on a chance to break back, while Kenin found the net on her first match point.

A long backhand brought about the end for Williams, with an emotional Kenin advancing to the last 16 of a grand slam for the first time, with Ashleigh Barty standing between her and a place in the quarter-finals.