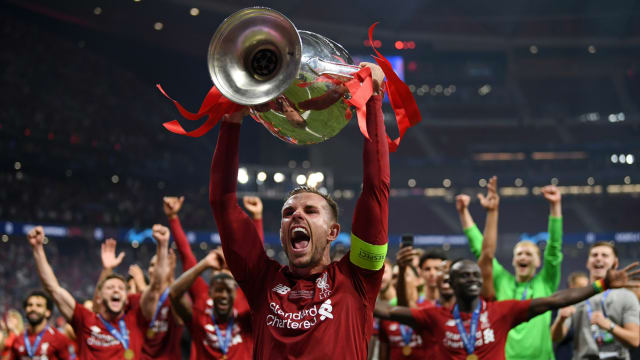 Liverpool and Tottenham were lacking the star quality expected of them as the Reds triumphed 2-0 in one of the most disappointing Champions League finals in memory.

Mohamed Salah scored after just two minutes from the penalty spot before 85 minutes of scant little action at either end gave way to a second goal from Liverpool substitute Divock Origi.

It was not the game either set of fans expected, but there were still key moments and interventions that ensured Europe's most coveted trophy headed to Merseyside.

Here's how we rated the players at the Wanda Metropolitano.

Liverpool's name is on the trophy for the sixth time!#UCLfinalpic.twitter.com/9AJSZtAhUv

Hugo Lloris: 7
Had no chance with the penalty and was otherwise excellent, making a superb save from Andy Robertson shortly before half-time to keep Spurs in touch. Could do little about Origi's goal.

Jan Vertonghen: 6
Did well to keep Salah at bay early in the second half and ventured forward to support a Spurs attack that failed to bare its teeth.

Danny Rose: 6
Fed Son Heung-min and Dele Alli throughout but saw much of his service frittered away, particularly early on.

Toby Alderweireld: 6
Was left bloodied at the end of a bruising encounter but could not get across in time to stop Origi from doubling Liverpool's lead three minutes from time.

Christian Eriksen: 6
Squandered a good chance when space opened up for him in first-half stoppage time and saw his curling free-kick saved by Alisson late on.

Harry Winks: 5
Effective around the halfway line, but like his team-mates seemed to freeze when approaching the final third. Replaced by Lucas Moura after 66 minutes.

Son Heung-min: 7
Showed flashes of energy and endeavour but was outmuscled by Virgil van Dijk or outwitted by Alisson when chances came his way.

Dele Alli: 6
Just as he did in the semi-final second leg against Ajax, Alli misplaced passes early on but grew into the game, only to fluff his lines when Tottenham's three best chances fell to him in the second half.

55 - Decent chance for @dele_official. He collects @ChrisEriksen8's pass in the box and turns, only to see his effort blocked.

Moussa Sissoko: 5
Suffered a torrid opening to the game when Sadio Mane's cross hit his arm after 26 seconds and lost the key midfield battle against Jordan Henderson that could have turned the game in Spurs' favour.

Harry Kane: 5
Barely involved in the first half, Kane improved in the last 20 minutes as Tottenham pressed for an equaliser, but it was too little, too late from the England captain.

63 - It's been another positive start to the second half. We're just waiting for that one chance to fall our way.

Lucas Moura: 6
Could have been Tottenham's saviour again but side-footed somewhat tamely at Alisson when the ball fell to him 12 yards out.

Eric Dier: 5
Replaced the disappointing Sissoko and fared little better in the heart of Tottenham's midfield.

Fernando Llorente: 5
Sent on late as Mauricio Pochettino sought the kind of heroics he delivered against Ajax but failed to make a mark on the game.

Alisson: 7
Faced no shots in the first half but remained alert enough to make a crucial double-save from Son and Moura – and a superb one from Eriksen – when it mattered most.

Trent Alexander-Arnold: 7
One of Liverpool's major attacking threats in the first half, firing narrowly wide with an audacious 25-yard drive.

Virgil van Dijk: 7
As calm and assured as you would expect of the PFA Players' Player of the Year and showed his pace and composure to cut Son's mazy dribble short after 75 minutes.

Joel Matip: 7
Viewed as the potential weak link in Liverpool's side by some, Matip did not let his side down and helped to keep Kane eerily quiet before providing the assist for Origi's goal.

Andy Robertson: 6
Linked up with Mane to cause Tottenham problems early on and put in a solid performance defensively.

Jordan Henderson: 7
Harried and pressed Tottenham when he had to, doing just enough to keep Winks and Sissoko from settling into the game.

Georginio Wijnaldum: 5
The game passed him by in the first half and he was little better after the break, making him the obvious choice to come off for James Milner.

Fabinho: 7
Combined with Henderson to nullify the Spurs midfield, helping the England man form a wall on the halfway line that snuffed out Sissoko and Alli time and again.

Mohamed Salah: 7
Lashed home Liverpool's opener with supreme confidence and teed Milner and Mane up for good second-half chances despite seeing relatively little of the ball.

Sadio Mane: 7
Ran at Spurs from the outset and forced the penalty before playing a key role in Liverpool's late resurgence.

Roberto Firmino: 5
After a very quiet first half, Firmino cut an even more subdued figure after the interval and was replaced by Origi just before the hour-mark.

Divock Origi: 8
There was a buzz of excitement at the Liverpool end when Origi replaced Firmino and he did not disappoint, lashing the only chance that came his way into the bottom corner of Lloris' net.

James Milner: 7
Reinvigorated Liverpool on the hour, firing just wide from the edge of the box and rallying the troops to push for the second.

Joe Gomez: 5
Replaced Mane late on but had little to do.