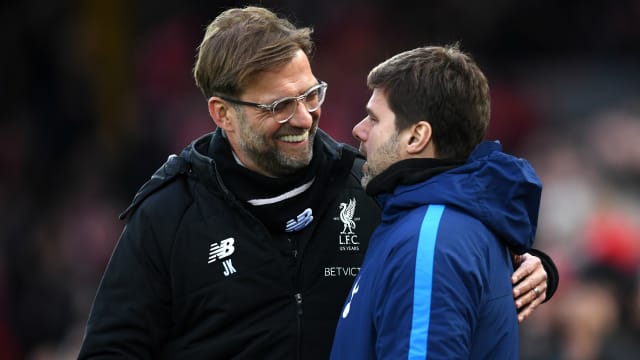 Mauricio Pochettino insists Jurgen Klopp should be praised for having reached three Champions League finals, not criticised for losing the previous two.

Pochettino's Tottenham take on Liverpool at the Wanda Metropolitano on Saturday in the first all-English showdown in the final of Europe's elite competition since Manchester United beat Chelsea on penalties in 2008.

Klopp's side reached the final last season, losing 3-1 to Real Madrid, with the German also having been beaten when he guided Borussia Dortmund to European club football's biggest game of the 2012-13 campaign.

Klopp also lost the Europa League final to Sevilla in his first term in charge of the Reds, but Pochettino thinks his opposite number deserves far more credit for simply reaching this stage.

"Brilliant! Thank you, that's nice. You have to tell Poch as well." #UCLfinalpic.twitter.com/9fZ38rP7M5

"I think the people judge because you lose the finals; for me, you need to judge that it's the third time arriving at the final. That is the most difficult thing and then a lot of circumstances will be decisive. You need to trust that the universe conspired, and you lift the trophy.

Pochettino thinks Spurs' chances of winning the competition for the first time in their history could depend on whether his players are able to shake off the pressure of the occasion.

"You cannot prepare a friendly game like [you prepare for] a final of the Champions League," he said. "When there are one billion watching you in a final, the most important thing is freedom.

"When you are seven, eight, nine [years old] and you play with freedom, the key is not to think that one billion people are watching you. That is going to be the key."