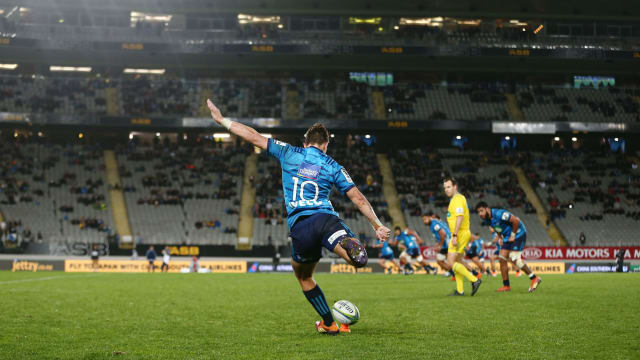 Harry Plummer missed a late penalty as the Blues' faint hopes of securing a Super Rugby play-off spot were dealt a blow with a 22-22 draw with the Bulls.

Youngster Plummer stepped up after the clock had ticked past 80 at Eden Park, but sliced his kick well wide on the posts.

Hanro Liebenberg and Ofa Tu'ungafasi exchanged tries in the first half, as the Blues took a 10-8 lead into the interval, and the hosts went further ahead when Scott Scrafton powered over.

Cornal Hendricks and Manie Libbok twice drew the Bulls level either side of Akira Ioane's try, but the visitors' resilience looked set to prove fruitless when Tom Robinson conceded a penalty in the final minute, only for Plummer to fluff his lines.

80' - Penalty to win it. Plummer lines it up...#RiseUp#BluesAllDay#BLUvBUL

Sitting fourth in the New Zealand conference with 28 points, the Blues would need a perfect finish to the season to stand a chance of making the play-offs.

Elsewhere, the Rebels squandered an opportunity to move clear at the top of the Australian conference as they went down 20-15 to the Waratahs.

The Melbourne-based Rebels will pick up a losing bonus point, though with a trip to Christchurch and a game against the Chiefs to come, their play-off place is not yet secure.