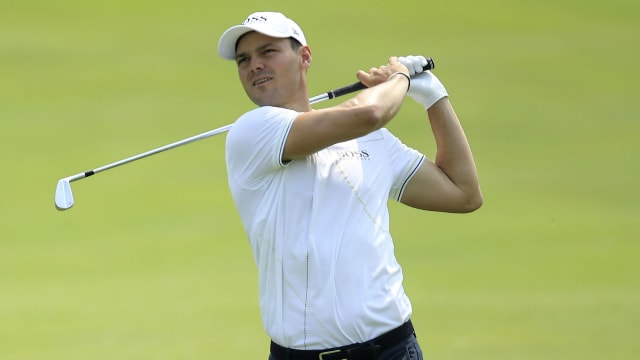 Martin Kaymer is part of a three-way tie for the lead on a congested leaderboard after the second round of the Memorial Tournament.

Kaymer, Troy Merritt and Lee Kyoung-hoon share the lead at nine under at the halfway mark at Muirfield Village.

The three-way tie for first place is followed by tough competition in Jordan Spieth, Rickie Fowler and others who had memorable rounds.

Merritt, who carded a six-under 66, and Lee, who shot a 67, entered the clubhouse well before Kaymer snuck up the leaderboard.

Kaymer, who is searching for his first PGA Tour win since the 2014 U.S. Open, had sole possession of the lead but a bogey on the final hole dropped him back into the three-way tie. He finished Friday with a four-under 68.

Spieth is right behind the leaders in fourth place at eight under and again used his putter to help keep him in contention. He finished with one bogey and three birdies to card a 70.

Another save from off the green for @JordanSpieth.

He's had 23 putts in 20 holes this week. #LiveUnderParpic.twitter.com/W9ux8PgWpl

Fowler also found success with his putter in Dublin, Ohio. He sits in a sizable tie for fifth place at seven under with the likes of Emiliano Grillo and Adam Scott.

Fowler, who has been the runner-up at the Memorial twice (2010 and 2017), recovered from a bogey on the par-four 17th hole to go bogey free on his back nine with two more birdies to shoot a 68.

This save keeps him within two of the lead.#LiveUnderParpic.twitter.com/evneRxWybc

Justin Rose had a colourful scorecard.

He opened his round with a bogey, two eagles and two birdies. He made the turn and fired off four more birdies to improve on his forgettable first round. Rose finished with the best round of the day, a nine-under 63, to move into a share of 10th place at six under.

Bryson DeChambeau, the 2018 winner, also came back from an over par opening round. He shot a two-under 70 to sit tied for 55th place at even par. He was close to not making the cut but was able to card three birdies to offset a bogey to play into the weekend.

Tiger Woods, who has won the Memorial five times, was playing relaxed despite the early hiccup and finished with an even-par 72 in his second round. He is at two under for the tournament.

Rory McIlroy (two over), Keegan Bradley (four over) and Phil Mickelson and Jason Day, who were both five over, missed the cut.