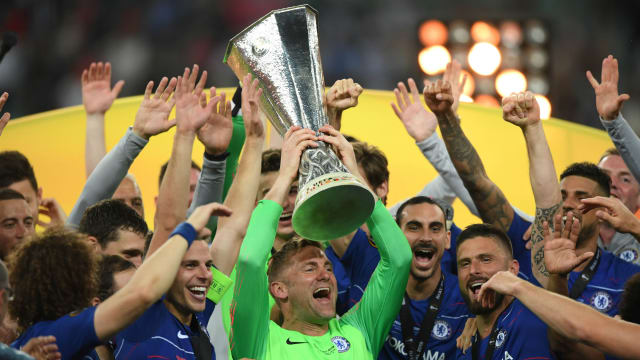 Former England goalkeeper Rob Green has announced his retirement from football at the age of 39.

Green was part of the Chelsea squad that celebrated winning the Europa League final against Arsenal in Baku this week.

The goalkeeper started the 2010 World Cup as England's first choice between the posts but was dropped after making an error against the United States in the Three Lions' tournament opener.

Green joined Chelsea on a free transfer last year after leaving Huddersfield Town but did not make a competitive appearance for the Blues.

"Following an incredible evening in Baku on Wednesday and after a 23-year career spanning three decades, I've decided that now is the right time to announce my retirement from professional football," Green said in a statement posted on Chelsea's website.

"Being part of the group and celebrations with such a special squad of players after winning the Europa League seems a fitting way to end what's been an amazing journey for me in the game.

"I've loved every moment and feel privileged to have enjoyed the career I have. I've played with, and against, some of best players in the world and have experienced so much that professional football has to offer.

"I've had the joy of representing some fantastic clubs, all of whom have helped to shape me in their own varying way. Thank you to all of the fans and everybody connected with Norwich City, West Ham, QPR, Leeds United, Huddersfield Town and Chelsea.

"Representing my country will always be one of my proudest achievements and I feel honoured to have played for England.

"Collectively we've shared some amazing times and I leave the game with memories that I'll always treasure."