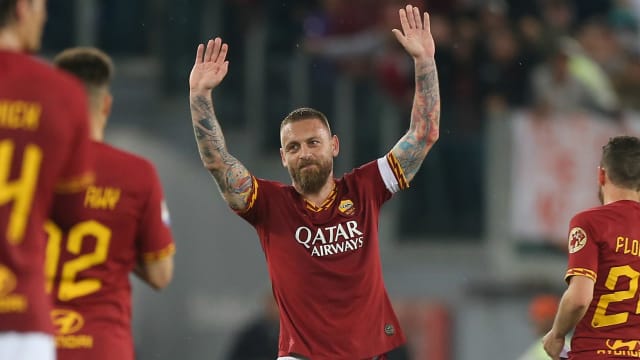 The 49-year-old lost his job after crashing out of the Champions League at the hands of Porto and reports on Thursday suggested that a group of senior players had pushed for backroom changes amid much infighting.

However, Pallotta has moved to deny these rumours and even claimed that De Rossi had lobbied for Di Francesco to be left in charge for the remainder of the season prior to his dismissal in March.

"Some aspects of that article made Daniele De Rossi look bad, which is not fair because Daniele has been a warrior for Roma for 18 years. He deserves respect and I have always respected him," he wrote in an open letter to fans on the club's official website.

"The notion that Daniele was out to get Eusebio Di Francesco sacked is 100% false from all of my conversations with him.

"In fact, with 12 games left in the season, I had a phone conversation with Daniele and he personally asked me to keep the coach until the end of the season. So if anyone is suggesting that he was asking for Di Francesco to be sacked, that couldn’t be further from the truth.

"If not De Rossi, did Dzeko, Manolas or Kolarov ask for the coach to be sacked? No. I’ve never heard any of those players say that they wanted us to sack Di Francesco. They never came to me either directly or indirectly."

"I’ve stayed silent for the last few weeks but there are some things that I feel I need to address..." #ASRoma
https://t.co/ezOzvlKH5o

De Rossi will be leaving Roma 18 years after making his professional debut for the club in the off season and Pallotta acknowledged that the club legend was badly treated, with regards to assurances over his place in the team given at the start of the season.

"We may have had some differences of opinion on how his playing career at Roma has ended but I’m not going to get into that in the public domain; that’s between Daniele and myself," he wrote.

"Daniele was emotional but he’s emotional because he cares and has cared about Roma forever. He plays with his heart – we’ve seen it for 18 years with Roma.

"Was he upset that someone was being brought in to play in his position, as stated in the article? Yes, he was – but that was because a day before he was told by [former sporting director] Monchi that we weren’t bringing in somebody."