This Week in US Sports: Stanley Cup heating up, Astros injuries becoming frequent 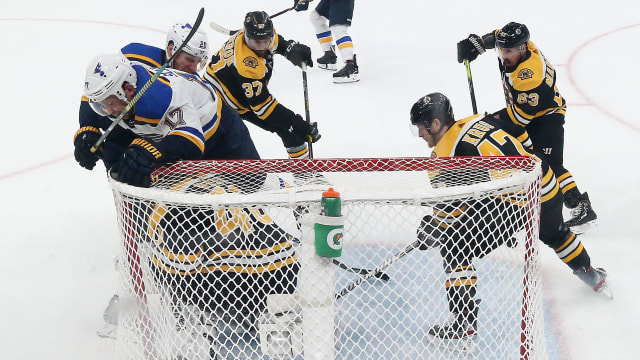 Things are starting to heat up as the Stanley Cup Final has been great through two games and the NBA's rumour mill continues to spin.

Meanwhile in MLB, one of the best teams in baseball is starting to suffer significant injuries and a potential high NBA Draft pick made a big decision.

All that and more this week in US Sports.

1. Stanley Cup all tied up

A lot of people thought the Boston Bruins would run roughshod over the St Louis Blues in the Stanley Cup Final and those beliefs were only validated by the team's 4-2 win in Game 1 on home ice.

But thanks to gritty play and a goal in overtime by Carl Gunnarsson, the Blues won Game 2 3-2 and have evened the series up at 1-1.

NO. 4 WINS IT IN BOSTON!!!! #stlblues#WeAllBleedBluepic.twitter.com/dVuNzfZlvR

St Louis had the worst record in the NHL in January and now are three wins away from their first Stanley Cup victory. Boston need to be prepared for what is coming on the Blues' home ice, and if they are not careful, they could be down 3-1 when they head back home.

2. Rockets about to clean house

Houston Rockets general manager Daryl Morey is not taking another loss to the Golden State Warriors in the playoffs lying down.

Morey has reportedly made Houston's entire roster available via trade with the exception of James Harden, but that is basically because his contract is unmovable.

The general manager is unhappy with how things ended the past two years and is not going to let the Rockets give it a go next season as currently constituted.

Even coach Mike D'Antoni appears to be moving on as he has reportedly given up on signing a long-term extension with the team.

Houston could look very different next season and dramatically changed in two years.

3. The Astros are the new Yankees

Houston are following in New York's footsteps this season as their entire roster is in the process of getting hurt.

First, 2017 American League MVP Jose Altuve went down, then current MVP candidate George Springer did, and Tuesday, the team lost 2012 number one overall pick Carlos Correa because of a rib injury suffered during a massage.

Now, the Astros are nowhere near as hurt as the Yankees have been as New York have had about 20 guys go on the injured list this year, but Houston are by no means healthy at this point and can only hope that improves down the line.

AJ Hinch gives us a status update a third of the way through the season and chats through some of our injuries so far.#AstrosAllAccess, presented by @StubHub. pic.twitter.com/nNJENmQZKq

The dream of Duke Blue Devils fans everywhere is done.

Zion Williamson has officially signed with CAA Sports. This matters only because of the rumour that the potential top pick in the NBA Draft was considering going back to Duke to avoid being drafted by the New Orleans Pelicans, who earned the top pick in the lottery.

We are proud to welcome Zion (@zionw32) Williamson to the CAA Sports Family! pic.twitter.com/GtWnJN47g7

Williamson never said anything of the sort, and it appears it was not much of a thought because he did not say anything publicly about not wanting to be drafted by New Orleans and has only driven home the fact he is excited to play with whoever drafts him because he has signed with an agent.

Signing with an agent means he cannot go back to college and he now is going to be a professional no matter what.