Stephens pleased with Paris progress, Bertens and Andreescu pull out 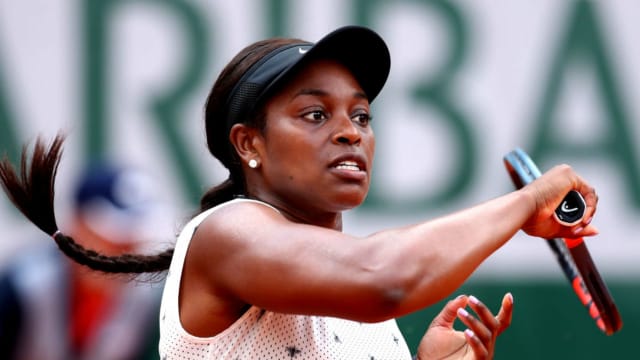 Sloane Stephens and Garbine Muguruza sealed their places in the third round of the French Open but Kiki Bertens and Bianca Andreescu pulled out on Wednesday.

Muguruza, champion at Roland Garros three years ago, was a 6-4 6-1 winner against Johanna Larsson.

Bertens was 3-1 down against Viktoria Kuzmova in the first set when she retired due to illness, while Canadian rising star Andreescu will not face Sofia Kenin as she is suffering with a shoulder injury.

Elina Svitolina went through without playing, as Kateryna Kozlova is struggling with a rib injury, while Karolina Pliskova thrashed Kristina Kucova 6-2 6-2.

Anastasija Sevastova and Johanna Konta were among the other winners on day four.

Hand if you're in 3R@SloaneStephens improves to 2-0 lifetime over Sara Sorribes Tormo with the 6-1 7-6(3) victory.#RG19pic.twitter.com/9i7CHrq1jK

STEPHENS IN 'A GOOD HEAD SPACE'

Stephens employed Sven Groeneveld as a coach this month and the American feels "everything is falling into place".

The seventh seed said: "I feel good. Obviously bringing on Sven I have had a lot of structure the last couple of weeks, at the amount of time we've been working.

"I feel like I'm in a good head space. I'm playing better.

"I'm seeing the court well, which I think is really important for me. My movement is good. Everything is just kind of falling into place, and that's kind of what you want."

Bertens was tipped as a contender to win her first major in the French capital but was struck by illness in the opening week.

The world number four from the Netherlands said: "Yesterday I felt good. No problems at all. I was practicing, resting, and I felt really well, ready for today.

"And then this morning I woke up at 3:00, and then I felt really sick. Vomiting, diarrhoea all night long, all day long. I felt a little bit better before the match.

"I had some sleep, and I just wanted to give it a try, but then as soon as I start warming up right before the match, it started again. There was not any energy left."

Kuzmova will face Konta in the last 32.

Muguruza will face Svitolina in one of the eye-catching third-round showdowns and looking forward to testing herself against the WTA Finals champion.

She said:  "I think it's a great third round for both of us. It's the type of match that I want to play. It can be, you know, any deep-round match, but it's in the third round. So it's going to be a good one."