Wenger, Sarri, Inzaghi - who could replace Gattuso at AC Milan? 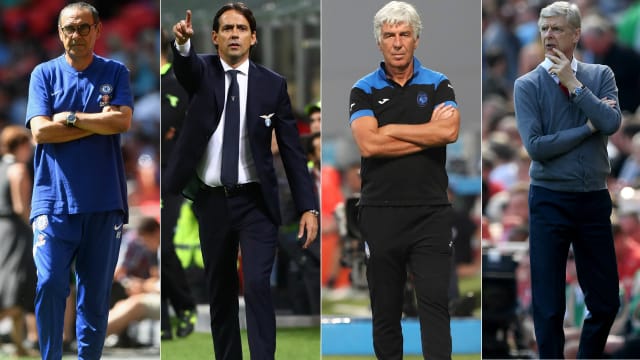 For the sixth time in five years, AC Milan are set to start looking for a new permanent head coach.

Massimiliano Allegri, Clarence Seedorf, Filippo Inzaghi, Sinisa Mihajlovic, Vincenzo Montella and now Gennaro Gattuso have all moved on - and that does not include interim bosses Mauro Tassotti and Cristian Brocchi.

One of Milan's favourite sons, Gattuso told La Repubblica he decided to step down after the Rossoneri fell just one point short of Champions League qualification following a fifth-place finish in Serie A.

The former midfielder - who was promoted from the Primavera team in November 2017 - only oversaw one full season in charge at San Siro, where the once almighty Italian giants have fallen on tough times.

The club have yet to confirm his departure officially, but the question is still being asked: who will replace Gattuso and lead Milan in 2019-20? We take a look at the leading candidates.

Wenger's link to Milan is clear: Ivan Gazidis. The pair worked together at Arsenal, where Gazidis was chief executive from 2009-18. Gazidis departed Emirates Stadium in September and took up his post at Milan three months later, and speculation over a Wenger reunion has made headlines since.

Out of work since ending his 22-year association with Arsenal in 2018, Wenger has been linked with Milan and numerous other clubs throughout the campaign. The 69-year-old Frenchman is planning a return to football though he is unsure if his comeback will be in management. But with Gazidis believed to be keen on adopting a similar approach to that which he oversaw at Arsenal - signing highly rated and youthful players before selling for profit - Wenger could be the perfect man for the job.

After just one season, Chelsea boss Sarri is already being tipped to return to Serie A. Things have not gone smoothly for the former Napoli coach, who is reportedly in the running to succeed Allegri at Scudetto winners Juve. Despite a third-place finish in the Premier League and finals in the EFL Cup and Europa League, his style of football has not gone down well with the Stamford Bridge faithful. 'Sarri-ball' has been met with boos in London and Italian clubs are apparently ready to lure the 60-year-old back to his homeland. Juve and Roma have both been linked as they look to fill their vacancies and you can add Milan to that list now, especially given the club reportedly tried to prise Sarri from Empoli in 2015.

One of the most in-demand coaches in Serie A, Inzaghi has earned quite the reputation with Lazio – even Juve are apparently interested. The brother of Milan great Pippo, Simone is fresh off guiding Lazio to Coppa Italia glory after eliminating the Rossoneri in the semi-finals. The 43-year-old, who won the Scudetto with Lazio as a player in 2000, has been a constant in the Italian capital: working with the club's youth team before stepping up as caretaker in 2016, Inzaghi's coaching career has never gone beyond the Stadio Olimpico. This off-season, however, could see a change of scenery.

Champions League football and possibly a statue awaits Gasperini in Bergamo. Atalanta - founded in 1907 - will feature in Europe's premier club competition for the first time in their history after ending the Serie A season in third position, ahead of Inter, Milan, Roma, Torino and Lazio. While results have been terrific since Gasperini's arrival in 2016, it has been their style that has wowed fans and pundits. No team scored more goals than Atalanta (77) in Serie A in 2018-19, not even Juve or Napoli, while Milan only managed 55. The 61-year-old former Inter coach has been linked with Roma, but he could be tempted by a one-hour drive to San Siro.

Monaco coach Jardim is another reportedly on the list. While 2018-19 was a challenging season for the Portuguese and the Ligue 1 club, Jardim has plenty of admirers within and outside France. He snapped Paris Saint-Germain's stranglehold on French football by leading Monaco to a shock league title in 2017, as well as the Champions League semi-finals. This season had more of a yo-yo feel to it, after Jardim was sacked only to return as Thierry Henry's replacement before narrowly preserving Monaco's top-flight status. Having left the principality once before, Jardim could do so again.

The likeliest of appointments appears to be Giampaolo. Reports have gone as far as to suggest the Sampdoria coach and Gattuso could swap clubs. Samp are coming off a 2-0 season-ending victory over Juve, which left them ninth in the table. The 51-year-old cast doubt over his future after admitting his objectives were a "little different" to that of Sampdoria as he urged the side to aim higher.

These are two men with history in Milan. Former midfielder Van Bommel only moved into senior coaching this season after replacing Phillip Cocu at PSV, but he is reportedly high on the list of potential candidates. Van Bommel oversaw a runner-up finish behind rivals Ajax in the Eredivisie this term, the tenacious Dutchman having served as an assistant with Australia and Saudi Arabia prior to returning to Eindhoven.

Ukraine coach Shevchenko, meanwhile, has made no secret of his desire to lead Milan in the future. One of the club's most lethal strikers in his day told DAZN earlier in May: "Maybe it'll be my turn to coach Milan one day."