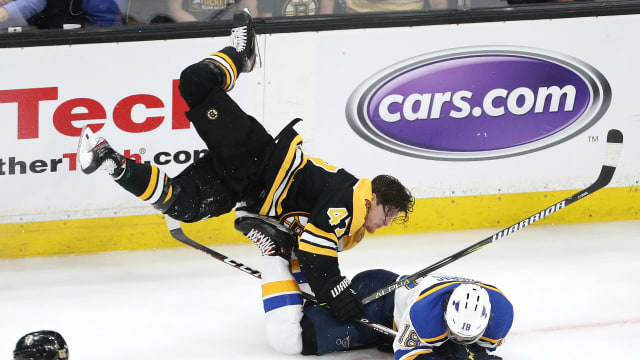 Boston Bruins defenseman Torey Krug was thankful to have had his hair cut as he reflected on delivering a helmet-less hit that proved key to their victory over the St. Louis Blues in Game 1 of the Stanley Cup Finals.

The Bruins made a sloppy start to Monday's opening game at TD Garden and had to come back from 2-0 down to prevail 4-2.

Boston were already ahead 3-2 in the third period when Krug, having tangled with David Perron, flew down the ice without his helmet and met Blues rookie Robert Thomas with a crushing hit that delighted the home crowd.

From there Boston eased to victory, though avoiding a bad hair day was the most important part of the incident in Krug's mind.

"I'm just glad I got a haircut a few days ago," Krug told reporters.

"First and foremost you want to take care of your head, make sure you don't put yourself in a vulnerable position. I'm sure my coach and my GM [general manager] were hoping I'd just get off the ice at that point but that's hockey."

Asked what his loved ones would have thought of such a risky move, Krug replied: "My wife... she's really pregnant right now so she's probably just worried about that.

"It's part of the game, momentum swings, [it] gives your team a boost of energy. I don't know what they were feeling on their bench but if it pushes them back and catches them off guard then [that's] great for our team.

"That's all you're trying to do out there is make little plays throughout the game that pushes your team in the right direction and that was one of them."