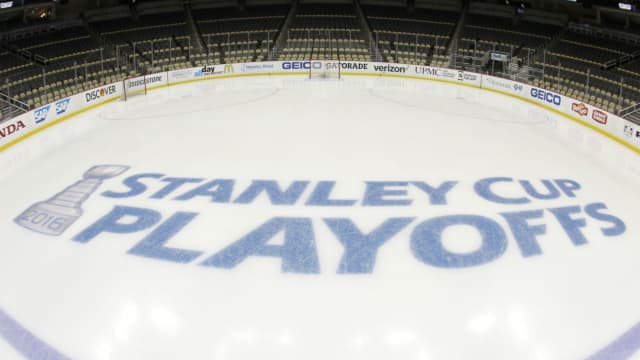 What would lifting the Stanley Cup mean to Boston? The Bruins could bring a championship to a city that already has the reigning champions in the NFL and MLB.

What would winning the Stanley Cup Final mean to St. Louis? Only everything.

The Blues have never won an NHL title. They have not been to the Stanley Cup Final since 1970. They are four wins from lifting the cup.

"People appreciate the magnitude of where we are," Blues defenseman Jay Bouwmeester said in quotes reported by the St.Louis Post-Dispatch.

"This is something, the experience where you look back down the road and say, 'that was cool,' but you want to win. Any team that makes it here, it's a good accomplishment. It's also very hard to make it here, and it's even harder to win.

"That's the focus. It's not getting to the final or being happy being here. Just like the other team, you want to win."

This year's match-up between the Bruins and Blues brings storylines aplenty, enough intrigue for even the casual or neutral fan.

It all starts Monday with Game 1 in Boston and here are five storylines to follow in the 2019 Stanley Cup Final.

There is a price to pay in the #StanleyCup Playoffs.

But ask any player and they'll tell you - it's worth it. pic.twitter.com/IO4YAuFjhI

Can the Blues close the deal on their comeback?

The Blue were dead last in the NHL at the beginning of January, when Las Vegas sportsbooks were offering 300-1 odds on a St. Louis Stanley Cup.

Fast forward to late May, and the Blues might be the most improbable Stanley Cup Finals team since…last year. (What, you thought we forgot what the expansion Vegas Golden Knights did in their inaugural season?)

Okay, so back to the here and now. The Blues accomplished their remarkable turnaround under interim coach Craig Berube, who replaced fired Mike Yeo after the team's horrible start.

It did not happen overnight, but the Blues embraced Berube's system and then kicked it in gear when rookie goaltender Jordan Binnington arrived in early January.

The Blues went 30-10-5 to close the season and parlayed the number three seed in the West into series victories over the Winnipeg Jets, Dallas Stars and San Jose Sharks to reach the championship series for the first time since they faced, get this, Bobby Orr's Bruins in 1970.

It is quite a story. The Blues hope to write a finish better than the Knights' loss last year to the Washington Capitals. If St. Louis does, then it would set the so-called baseball city on its head.

How will David Backes fare against his former team?

The Bruins' David Backes, like every single one of his former Blues team-mates, will be playing in his first Stanley Cup Final.

A Blues fan favourite, Backes spent the first decade of his NHL career in St. Louis and was the team's captain from 2011-16, when he left via free agency for Boston.

"There's a part of me that's regretful that we didn't get to a Final or win a Cup while I was there," Backes told reporters.

"I said that in my interviews leaving there. It's a huge regret that I'll always have that we weren't able to get the job done.

Backes came to Boston on a five-year, $30million deal in 2016 and, frankly, his production has not exactly lived up to the contract.

He was a healthy scratch to start this postseason but has worked his way into coach Bruce Cassidy's rotation on the right side of the Boston's second line. Not only is he providing a valuable veteran presence in the dressing room, but he also has added two goals and three assists in 11 games while his hard-hitting style has made it tough on opposing teams.

When it comes to the #StanleyCup Final, @dbackes42 sees no friends on the other side, despite being a former Blues captain. pic.twitter.com/n3U7nDK9vt

Rest versus rust, who ya got?

Anecdotal evidence in this year's NHL playoffs shows that smoking an Eastern Conference opponent can be hazardous for a team's next-round health.

Note: The Columbus Blue Jackets swept the Tampa Bay Lightning in the first round and then lost to the Bruins in the East semi-finals. The New York Islanders swept the Pittsburgh Penguins in their first-round series and then bowed out to the Carolina Hurricanes in the second round.

The Bruins dispatched the Hurricanes, 4-0, in the East final — on May 16. In fact, Boston will have had 10 days off, exactly twice as much time off before Monday's Game 1 than the Blues, who beat the Sharks in Game 6 on Tuesday.

Cassidy hoped to knock some of the rust off with an intra-squad scrimmage Thursday and almost paid for it as Brad Marchand jammed a hand, giving the Bruins a brief scare.

On the plus side, the extended time off helped Zdeno Chara, the Bruins ageless captain (okay, he's 42). Chara did not play in the series-clincher against the Hurricanes but was a full participant in the intra-squad scrimmage.

Can Tuukka Rask's shut down the Blues, shut up the critics?

Rask leads all goalies in this postseason with a 1.84 goals-against average and .942 save percentage. Yet there long has been a chorus that he goes missing in the big games. Well, these are the biggest games.

And inevitably Rask will be compared to his predecessor Tim Thomas, who led Boston to the Stanley Cup and won the Conn Smythe Trophy in 2011.

If Rask continues his excellent play against the Blues and the Bruins win the Cup, then he will have silenced all doubters.

In the opposite goal, Binnington, while mounting a Calder Trophy season since January, has been more inconsistent, surrendering five-plus goals three times in this postseason.

Suffice it to say: Binnington can steal one game, but Rask can steal a series.

From Joe Sakic passing the #StanleyCup to @RayBourque77, to @Backstrom19 getting it from @ovi8, the first pass is a magical moment every year.

Which @NHLBruins and @StLouisBlues player should receive the #StanleyCup from their captain first? pic.twitter.com/zTYh3ntMGW

Will the Blues physicality be too much for the Bruins?

Cassidy says this Blues team is "probably the most physical that we’ve seen" and with Boston's own hard-hitting mentality, this series should be a slugfest.

"They are physical; we'll be physical," Cassidy said on Sunday. "I don't think we shy away from that type of game."

Although Chara is the biggest player on the ice at 6 ft 9, St. Louis is bigger as a group overall.

"At this point, you're going to get both teams coming out of the gates laying their hits," big Blues defenseman Robert Bortuzzo said. "It's going to be a heavy series. It's hard to say how much physicality will be going both ways. I'm sure guys will be looking to get their licks in."

Yet, under Berube, the Blues do it in a controlled manner, rarely letting emotions get the best of them.

If the Blues can hit the Bruins and get them to counter in anger (looking at you, Brad Marchand) then St. Louis could get under Boston's skin and that could affect the outcome not only of an individual game, but also the entire series.