Serena recovers from slow start to progress in Paris 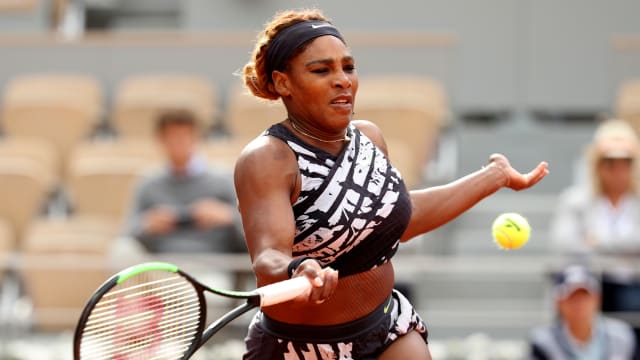 Serena Williams recovered from an underwhelming start to defeat the unheralded Vitalia Diatchenko 2-6 6-1 6-0 in the first round of the French Open.

Three-time champion Williams struggled to find her rhythm and range in an uncharacteristically poor first set on Court Philippe-Chatrier as world number 83 Diatchenko threatened a mammoth upset in Paris.

But Diatchenko – who knocked Maria Sharapova out of Wimbledon last year – had little reply when Williams' unmatched power started to land and the 23-time grand slam champion ultimately coasted to an 800th main-draw win.

The 37-year-old, whose only other meeting with Diatchenko was at the US Open in 2015, will now face Kurumi Nara or Dalila Jakupovic in round two.

Serena Williams wins 12 of the last 13 games to race away with her 1R win over Vitalia Diatchenko 26 61 60. Looked sharp in the end.

Williams, whose most recent triumph at Roland Garros was in 2015, had already saved a couple of break points by the time she dropped serve to love in a scratchy game five.

The American great's timing was well off and she threw her arms up in exasperation when a wild overhead volley went long.

Diatchenko was in inspired form too, though, and a couple of exquisitely timed double-backhand winners set up another break-point chance, which was converted when Williams went long from the baseline.

The Russian needed three goes to deservedly seal the first set but soon found herself under the cosh in the second following back-to-back double faults in game two.

Williams made the break with a thumping forehand and, perhaps motivated by the anger of such an inept first-set showing, quickly started to dictate the rallies with consummate ease.

Diatchenko struggled to regain the standard she set early in the match and was soon a double break down from which there was no recovering.

It became an uphill struggle for Diatchenko when she was broken again in the first game of the decider after putting a forehand long, and when she skewed a backhand long to gift another break to Williams, the writing was on the wall.

A double fault handed a third break to Williams, who easily served out for the bagel and the match.