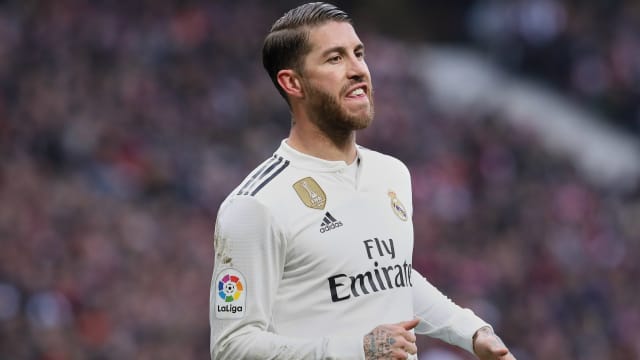 Florentino Perez insisted Sergio Ramos will not leave Real Madrid on a free transfer after confirming the club's captain is considering a move to the Chinese Super League (CSL).

News emerged on Monday that Madrid star Ramos had reportedly requested permission to join a team in China after meeting with president Perez.

The 33-year-old centre-back was believed to be close to joining Premier League giants Manchester United in 2015 before extending his Madrid contract, which now runs until 2021.

Perez was asked about speculation over Ramos and the Madrid boss said he is not prepared to sanction a CSL deal that would see the defender leave on a free.

"They [Ramos and his advisors] came to see me in my office," Perez told Onda Cero's El Transistor.

"They mentioned that he might leave but without a transfer fee because transfer fees in China are very complicated.

"I told him that he can't leave and that we would be speaking to the Chinese club interested in signing him.

"It's impossible to let your captain leave for free, that would be setting a bad precedent."

Ramos has enjoyed great success at the Santiago Bernabeu since arriving from Sevilla in 2005, winning four LaLiga titles and four Champions League trophies among others.

The Spain international scored six goals in 28 LaLiga appearances as Madrid finished third last season, while he played 40 matches in all competitions, with the club's Champions League title defence ending in the last 16.