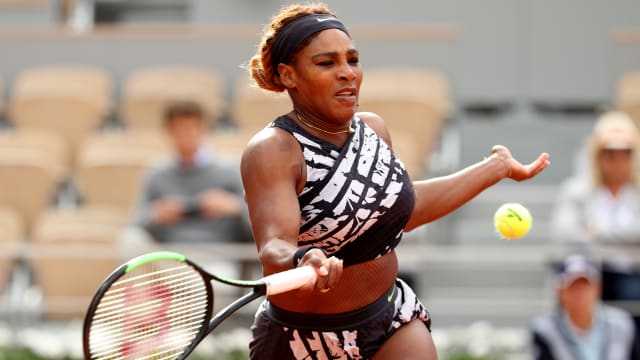 Serena Williams wore another eye-catching outfit at the French Open and the 23-time grand slam champion said it was all about positive re-enforcement and empowerment.

After unveiling a skin-tight 'catsuit' at Roland Garros in 2017, Williams made another fashion statement during her 2-6 6-1 6-0 first-round victory over Vitalia Diatchenko in Paris on Monday.

Afterwards, the former world number one and 37-year-old told reporters: "Well on the outfit it has words in French, and it says 'Queen', it says 'Champion', and it says 'Mom'.

Never count her out.@serenawilliams makes her way into the second round with a 2-6 6-1 6-0 win over Diatchenko.#RG19pic.twitter.com/gcxuQ5S4Pw

"Those are things that mean a lot to me and reminders for me and for everyone that wants to wear it.

"Just remind everyone that they can be champions and are queens. So I love that about it. And I don't know, my super power today was just hanging in there and staying positive for once."

Williams smiled as she added: "I'm just crazy, to be honest. I think everyone knows that now. I just needed to change. I was, like, I've got to try something different. It's not my forehand, it's my clothes; right? So really, that's it. I'm just mentally a little off."

Let the Roland Garros begin. Here is my French Open look designed by @virgilabloh and @nike.