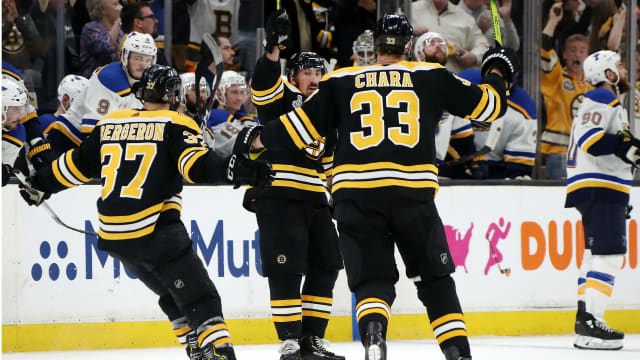 The Boston Bruins beat the St Louis Blues 4-2 in Game 1 of the NHL Stanley Cup Final.

Boston scored four unanswered goals to see off St Louis in the series opener at TD Garden on Monday.

Boston will host the Blues in Game 2 on Wednesday.

The Bruins swept the Carolina Hurricanes in the Eastern Conference finals and had 10 full days off before facing the Blues in Game 1.

Boston – who held an intra-squad scrimmage late last week — were not sharp early and fell behind less than 10 minutes into the first period.

Guess this is what the kids call a game changer? #StanleyCup

The Bruins, however, shook off the rust and bounced back to come away with the win. Sean Kuraly put Boston ahead for good with a goal a little more than five minutes into the final period.

Brad Marchand then added an empty netter to secure the victory.

The Blues had all the momentum early in the second period after Vladimir Tarasenko found the back of the net less than a minute in to put his team ahead 2-0.

But from there, the period was forgettable for St Louis as Boston dominated. Connor Clifton quickly scored the Bruins' first goal of the 2019 Stanley Cup and Charlie McAvoy followed with a power-play goal just over a 10 minutes later.

In total, the Bruins outshot the Blues 18-3 in the period.

The score could have been a lot worse for the Blues heading into the intermission, which leads us to our next takeaway.

Blues goalie Jordan Binnington was great in Game 1 despite the loss.

The 25-year-old rookie kept his team competitive throughout the matchup. He made 34 saves and limited Boston to just one goal on five power-play attempts.

St Louis will hope Binnington can repeat his performance on Wednesday as the team look to even the series at 1-1.

Tuukka Rask made 18 saves for the Bruins in the winning effort.