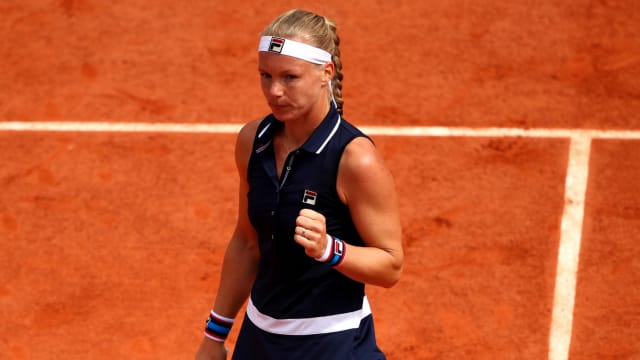 Kiki Bertens' comfortable progress from round one of the French Open was in contrast to Serena Williams' struggles, while teenager Diane Parry thrilled the Roland Garros locals with her win on Monday.

The in-form Bertens, a champion in Madrid this month, ousted home favourite Pauline Parmentier 6-3 6-4 in Paris.

Three-time champion Williams was off form in her opening set against Vitalia Diatchenko before recovering to triumph 2-6 6-1 6-0 on Court Philippe-Chatrier.

Caroline Wozniacki fell at the first hurdle, but 16-year-old's Parry's main-draw debut was the stuff of dreams in the French capital.

World No. 4 @kikibertens continues her form on clay, easing past Parmentier 6-3 6-4.

Bertens was in complete control during her 6-3 6-4 defeat of Parmentier and the Dutchwoman is considered among the favourites with many pundits – a tag she is not all together comfortable with.

"It's not really something that I'm enjoying, but, no, I know it's going to be really, really tough [to win] the title here," she said.

Williams was uncharacteristically poor in her opening set versus Diatchenko and let out an almighty roar after an error early in the second, which coincided with a big upturn in fortunes.

"I was just so frustrated. I just let out this roar and here I am. Yeah, so maybe that helped. Like I said, I have never done that before," she said.

Never count her out.@serenawilliams makes her way into the second round with a 2-6 6-1 6-0 win over Diatchenko.#RG19pic.twitter.com/gcxuQ5S4Pw

At 16 years and 281 days old, Parry is the youngest player to win a main-draw match at the French Open this decade.

Her one-handed backhand was a potent weapon in the 6-2 6-4 beating of Vera Lapko, evoking memories of the legendary Amelie Mauresmo, who just so happened to have provided a helping hand.

"It's Amelie Mauresmo that taught me. I love it," she said. "I'm very happy to have a one-handed backhand. I'm one of the very few players to have one, so I stand out thanks to this."

Wozniacki (13) bagelled Veronika Kudermetova in the opening set of their tie, but the Russian rebounded to shock her more illustrious opponent 0-6 6-3 6-3.