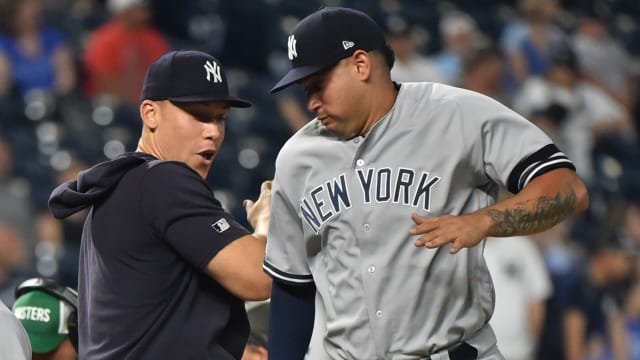 The New York Yankees came out on the winning end of a double-header against the Kansas City Royals in MLB on Saturday.

New York won the first game 7-3 and then kept Kansas City at bay in the second.

Aroldis Chapman replaced Zack Britton on the mound with two on and no out in the ninth inning of the second game. Chapman allowed a run as the Royals pulled within one, but he ultimately escaped the final frame by striking out Terrance Gore. The Yankees won 6-5.

They scored early and often and recorded all six of their runs in the second and third innings.

Get on, get in. pic.twitter.com/UsMA3kJKG4

It seemed as though New York carried their late momentum from game one into the double-header. The Yankees scored two runs in the first inning to start the day but were held scoreless until breaking out the bats again in the sixth. They scored the bulk of their runs in the seventh and eighth innings.

J.A. Happ was awarded the win in that game and Chance Adams in the second. Chapman was given the save.

New York are now 2.5 games in front of the Tampa Bay Rays to lead the American League (AL) East.

Kansas City's Scott Barlow and Jorge Lopez were each tagged with a loss.

The Arizona Diamondbacks earned another big win over the San Francisco Giants. Ketel Marte led the way, going two for four including a 397-foot home run. Arizona went on to win 10-4.

With an exit velocity of 113.9 MPH, this was the 4th hardest-hit #DbacksJack in the @statcast era (since 2015). pic.twitter.com/t5cbYTM9Gm

Hunter Renfroe was four for six as the San Diego Padres beat the Toronto Blue Jays 19-4. The team set a franchise record with seven home runs, including two from Renfroe.

Paul Goldschmidt was three for three in the St Louis Cardinals' 6-3 win over the Atlanta Braves. He helped build the team's lead early with an RBI single in the fifth inning.

Manny Banuelos had a forgettable day on the mound. The Chicago White Sox lefty allowed five hits and five earned runs in four innings of work. He moved to 2-4 (7.71 ERA) this season.

The Miami Marlins strung together just four hits as they were blanked by the Washington Nationals 5-0. Austin Dean finished 0 for four at the plate while three others – Starlin Castro, Brian Anderson and Bryan Holaday – all went 0 for three.

Correa walks it off

What does Carlos Correa do when he hits a walk-off RBI? Gives a modest shrug. The Houston Astros beat the Boston Red Sox 4-3.

This should be fun. The Cincinnati Reds and Chicago Cubs will play a rubber match on Sunday after two close games. Neither team won by more than two runs. Cincinnati will start Tanner Roark (3-3, 3.51 ERA) and Chicago will counter with Jose Quintana (4-3, 3.30).