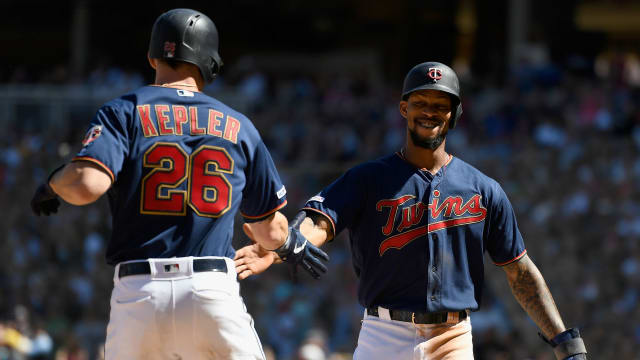 The Minnesota Twins have been tough to beat and the Chicago White Sox had no answers for them in MLB on Sunday.

Jake Odorizzi battled severe congestion in his start but still pitched 5.1 innings while allowing just one hit. It was the fourth time this season Odorizzi gave up a lone hit. He struck out nine before he was replaced by Matt Magill.

"[Odorizzi] threw the ball exceptionally well," manager Rocco Baldelli said, via MLB.com. "[He] fought through his start, because he's obviously not feeling well. We knew that as he was going through it ... He doesn't sound the best, but he performed nicely."

Max Kepler and Eddie Rosario accounted for all of the Twins' runs. Rosario started the scoring with a three-run home run in the third inning. Kepler added an RBI double that frame and followed it up with another three-run homer in the seventh.

Dylan Covey was charged with the loss for the White Sox.

Biggio steps up for Blue Jays

Justin Turner was five for five in the Los Angeles Dodgers' 11-7 win over the Pittsburgh Pirates.

Brewers starter Brandon Woodruff struck out 10 and allowed just one hit as Milwaukee beat the Philadelphia Phillies 9-1. Woodruff moved to 7-1 (3.22 ERA) this season.

Kyle Schwarber came up short for the Cubs. The leadoff hitter was 0 for five in Chicago's 10-2 loss to the Cincinnati Reds.

Mike Leake had a tough go against the Oakland Athletics. The Seattle Mariners starter gave up five earned runs in 6.2 innings of work in a 7-1 loss.

There was no doubt about a huge homer from Los Angeles Angels star Mike Trout.

Another game, another home run for the Brewers' Christian Yelich. He now has 21 this season.

The Mets will try to build off their recent success when they face the Dodgers on Monday. New York have won their past two series and are 4.5 games behind the first-placed Phillies in the National League (NL) East. The Mets will start Jacob deGrom (3-5, 3.72 ERA) in the series opener. The Dodgers will counter with Clayton Kershaw (4-0, 3.33) after sweeping the Pirates.