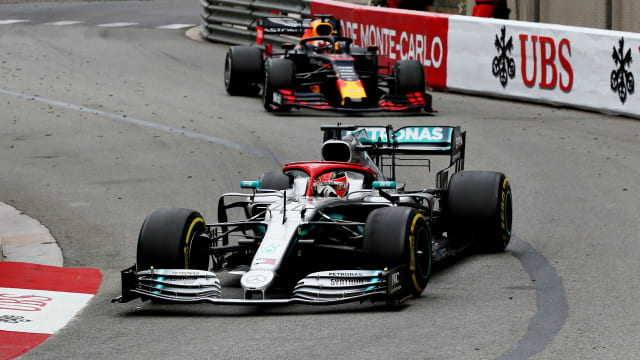 Pole-sitter Hamilton pitted under the safety car on lap 11 and somehow managed the medium compound until the end of the race to open up a 17-point lead over team-mate Bottas at the top of the Formula One drivers' standings as the anticipated rain held off.

Bottas sustained a puncture and rim damage when Verstappen was released into him in the pits and had to return for hard tyres, which the Red Bull driver – who received a five-second time penalty – and Sebastian Vettel were running.

Verstappen's sanction meant he missed out on the podium despite keeping the pressure on Hamilton throughout, with Vettel and Bottas taking second and third respectively as Mercedes failed to register a record-breaking sixth one-two.

In his desperation to perform at his home circuit Charles Leclerc paid the price for trying to overtake Nico Hulkenberg at La Rascasse, spinning out and bringing out the safety car before retiring.

Bottas started second but his collision with Verstappen forced him into an unplanned pit stop and he was unable to make headway after slipping to fourth.

Can confirm Valtteri had a right front puncture and rim damage after he was pushed into the wall in the pitlane.

The incident is under investigation.

Long race still from here, VB. Let’s get those positions back! #MonacoGP#F1pic.twitter.com/7AIzSPqSw2

Just five seconds separated the leading quartet at the midway point and Hamilton frequently made known his displeasure with the deterioration of his tyres over team radio.

The championship leader managed to negotiate his way past backmarkers and still keep Verstappen at bay as the race went on, but stated his team were "hoping for a miracle" by keeping him out.

Verstappen was granted more power for the final 10 laps and he made contact with Hamilton when looking to go down the inside at the chicane with three laps remaining.

The incident was investigated by the race stewards as Hamilton took the chequered flag, having worked exceptionally hard to claim his fourth victory of the season and second in succession.