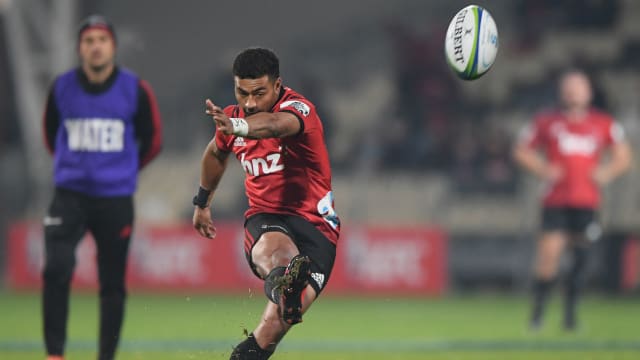 The Crusaders continued their winning habit against the Blues with a 19-11 victory at AMI Stadium.

Super Rugby's runaway regular season leaders have now won 10 matches in succession against the Blues after a Christchurch encounter where goalkicking proved the difference.

Richie Mo'unga landed four penalties and converted Bryn Hall's try, set against a pair of three-pointers from Harry Plummer, who failed to add the extras to Rieko Ioane's late score.

Scott Robertson's side have two games of their schedule left and are 13 points ahead of the Hurricanes, who have a match in hand.

That's class from the Crusaders

There was derby delight for the Sharks, who saw off the Lions 27-17 at Kings Park, with Curwin Bosch, Dan du Preez and Makazole Mapimpi on the scoreboard for the home team.

Lionel Mapoe and Cyle Brink touched down for the Lions but they could not avert a third consecutive loss to the Sharks, who are second in the South African Conference.

Top spot in that section belongs to the Jaguares after the Argentine franchise won 23-15 on the road against the Waratahs thanks to Ramiro Moyano's brace.

Pablo Matera was yellow carded for collapsing a maul in the 55th minute and, after the resulting penalty try, replacement Curtis Rona scored in the corner.

However, Bernard Foley could not add what would have been a game-levelling conversion and Joaquin Diaz Bonilla came off the Jaguares bench to land a pair of penalties and secure victory.

The Rebels demolished the Sunwolves 52-7 – Marika Koroibete running in two of eight tries in a bonus-point triumph – while the Highlanders' 34-22 loss to the Stormers means New Zealand faces the prospect of having only the Hurricanes and the Crusaders in the finals.