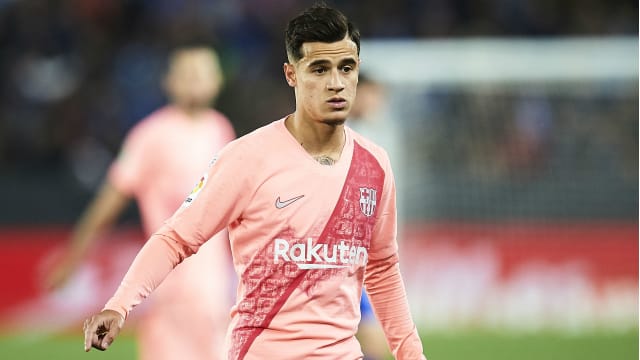 Philippe Coutinho, Nelson Semedo and Arthur all start for Barcelona against Valencia in the Copa del Rey final on Saturday after recovering from injuries just in time.

Coutinho has endured a particularly difficult season for Barca, with supporters regularly getting on his back in response to underwhelming performances.

He had been considered a major doubt for the final after sustained a hamstring injury against Getafe on May 12, but Barca announced earlier on Saturday the Brazilian had been given the all-clear.

With transfer links to other clubs surfacing recently, while Antoine Griezmann has been reported as a potential replacement for him, it gives Coutinho the perfect opportunity to silence the doubters.

His international team-mate Arthur's season has been completely the opposite, with the former Gremio star seamlessly adapting to life in Camp Nou.

Arthur had been struggling with muscular problems, but he will slot into the midfield as normal.

Semedo had been a doubt after a head knock, though serious injury was soon ruled out.

Valencia have named an attack-minded XI in a 4-4-2 formation, with Kevin Gameiro and Rodrigo Moreno leading the line, supported by Goncalo Guedes and Carlos Soler out wide.

Full-backs Jose Gaya and Daniel Wass – usually a midfielder – will be expected to offer support in attack as well, as Valencia go for their first Copa del Rey since 2007-08.