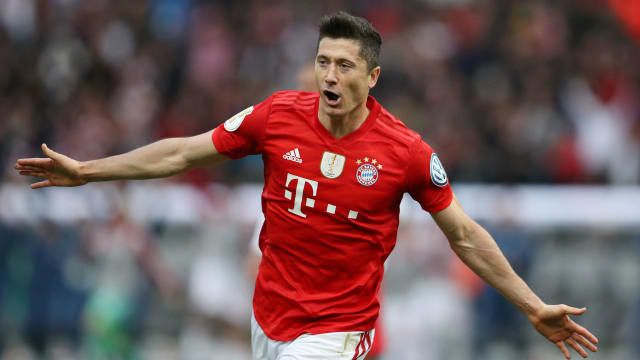 Having secured a seventh straight Bundesliga title last time out, Bayern went ahead against a resilient Leipzig - featuring in their first ever major final - thanks to Lewandowski's wonderful 29th-minute header.

Things would have been different if not for Bayern goalkeeper Manuel Neuer, who on his return from injury pulled off a pair of fantastic stops to deny Yussuf Poulsen and Emil Forsberg.

Thiago Alcantara passed up a golden chance to extend the lead, but his miss mattered little as Coman made sure of Bayern's first domestic double in three years before Lewandowski's delicate chip rounded off a fine day for Kovac's side.

Thrown straight back into Bayern's starting XI after recovering from injury, Neuer had to be at his best 11 minutes in to parry Poulsen's header onto the bar.

Joshua Kimmich made two superb blocks as Leipzig's pressure continued but, against the run of play, it was Bayern who struck first.

David Alaba delivered a cross that was behind Lewandowski, but he somehow stooped to meet it and guided the ball back at goal, generating enough power to beat Peter Gulacsi and find the bottom-left corner of the net.

Coman seemed certain to double Bayern's lead, only for Ibrahima Konate to make an outstanding goal-line clearance, though the linesman did then flag for offside, before Gulacsi managed to turn Mats Hummels' close-range effort wide.

Forsberg should have made Bayern pay for that profligacy, though his heavy touch enabled Neuer to intervene, with Timo Werner's effort then cleared off the line.

Thiago headed wide of an open goal after the hour, but fortunately for Bayern, Coman spared his team-mate's blushes.

Having taken the ball under control with a delightful first touch, Coman kept his cool to slam home, and Bayern were not finished there.

Kimmich's sublime pass set Lewandowski away and, after shrugging off his marker, he lifted a classy finish over Gulacsi to add further gloss to Bayern's 19th DFB-Pokal triumph.

What does it mean? Back-to-back triumphs for Kovac

Kovac guided Eintracht Frankfurt to a 3-1 win over his future employers in the 2018 final, and with this victory, he has become the first coach to win back-to-back DFB-Pokal titles with two different clubs.

And for all the criticism Kovac has faced this season, he has now won the double - Bayern's first since 2016 - though whether it is enough to keep him in the job remains to be seen.

Outgoing Franck Ribery and Arjen Robben had to settle for cameos from the bench, but it was two other Bayern stalwarts who stole the show.

Despite not having featured since April 14, Neuer looked as if he had never been away, making two instinctive stops, while Lewandowski provided the moments of quality to get Bayern off the mark, and ultimately round off the victory in style.

After a difficult season in 2017-18, Forsberg has performed well thus campaign, but squandered a gilt-edged chance to restore parity when he raced clear early in the second half.

Had that chance fallen to Werner, Neuer may well not have stood a chance, but as it was Leipzig could not pull level, and Bayern duly made them pay.

Bayern have already started their transfer business, with Benjamin Pavard and Lucas Hernandez having agreed to join, while Leroy Sane is also a target.

Leipzig may well lose their star man Werner in the off-season, with Bayern among his reported suitors, but their incoming boss Julian Nagelsmann is sure to have money to spend.