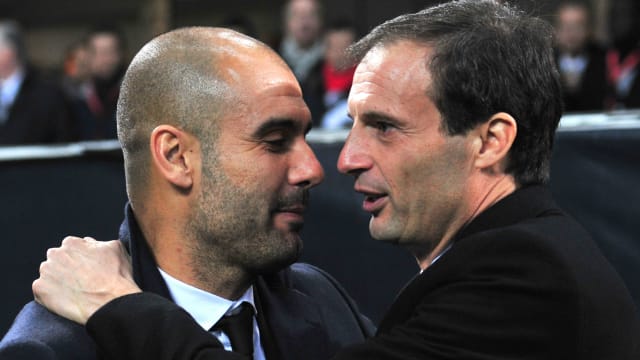 Massimiliano Allegri has claimed his Juventus successor will be "a manager of Manchester" amid speculation linking Pep Guardiola with a shock move to Turin.

On Thursday, Italian news agency AGI reported Manchester City boss Guardiola had agreed a four-year contract worth €24million annually to take over at Serie A champions Juve, claiming the deal will be announced on June 4 before a presentation 10 days later.

Speaking before City completed an unprecedented domestic treble by hammering Watford 6-0 in last weekend's FA Cup final, Guardiola insisted he had no intention of moving to Juventus and club board member Alberto Galassi told Sky Italia the renewed reports were "a load of nonsense".

However, Allegri made a mischievous contribution to the saga when he attended a restaurant opening in Dairago, Milan.

Local newspaper Sport Legnano reported Allegri was asked by a Juventus fan who the club's next head coach would be and he replied: "A manager of Manchester is coming."

Allegri confirmed last week he would leave Juventus after guiding them to a fifth consecutive Scudetto this term.

Success in the Champions League proved elusive for the former AC Milan boss, however, with Ajax ending the Italian club’s interest at the quarter-final stage this time around, following final losses to Barcelona and Real Madrid respectively in 2015 and 2017 finals.

Guardiola has two years remaining on his current City contract and has swept to five of the previous six major domestic honours on offer in England.

A trophy haul like no other, celebrated the only way we know how!