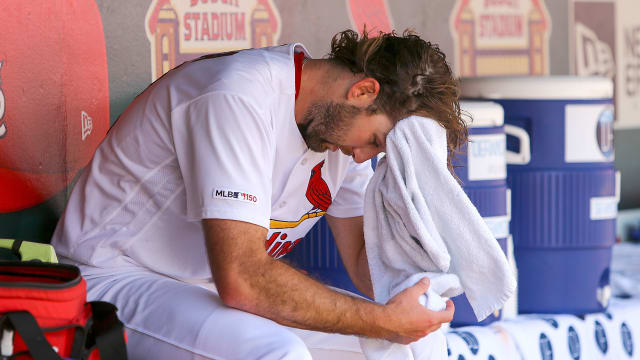 The St Louis Cardinals lost the first game of a MLB doubleheader to the Kansas City Royals as Michael Wacha struggled again.

After an opening 8-2 defeat to the Royals on Wednesday, the Cardinals had lost five of their last seven and 13 of 19 in May.

And this all comes after St Louis won their fifth game in a row — and 10th in 11 games — on May 1 over the Washington Nationals.

Things are not working right now for the Cardinals and starting pitcher Michael Wacha is no exception.

The 2012 first-round pick took the loss midweek as he allowed six earned runs in 4.6 innings of work. Wacha has a 6.64 ERA in four May starts.

Fortunately for St Louis, they did win the second game 10-3 on Wednesday but that does not change the fact that the team are not well.

What makes matters worse for the Cardinals and Wacha is division rivals the Chicago Cubs won again 8-4 against the Philadelphia Phillies behind a three-run homer from Anthony Rizzo and a grand slam from Albert Almora.

Chicago are 28-18 for the season and have gone 14-6 in May and now lead the fourth-place Cardinals by five games in the National League Central.

Chicago White Sox rookie Eloy Jimenez hit two home runs in a game for the second time in his career in a 9-4 win over the Houston Astros.

Gleyber Torres continued his dominance over the Baltimore Orioles as he hit two more home runs in the New York Yankees' 7-5 win. Torres has 12 home runs this season, with 10 of them against the Orioles. He has hit two home runs in a game against them four times.

Both starting pitchers at Miller Park struggled in the Milwaukee Brewers' 11-9 victory over the Cincinnati Reds. Zach Davies gave up six earned runs in three innings of work, while Luis Castillo allowed four earned in 2.6.

Kiermaier with the arm!

Rays centerfielder Kevin Kiermaier does not just have a great glove, he has a wonderful arm too and Cody Bellinger learned that the hard way in the Los Angeles Dodgers' 8-1 loss to Tampa Bay.

Confirmed: You can’t run on KK.#RaysUppic.twitter.com/TibJd9CIaV