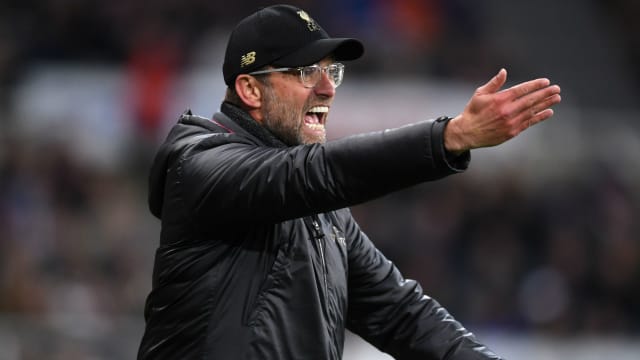 Jurgen Klopp has revealed how he acts as a "reserve tank" for his Liverpool players during games, even if they have become accustomed to his touchline antics.

The Reds boss is not one to suppress his emotions when watching the game unfold from his technical area, even venturing out onto the pitch to hug goalkeeper Alisson after a dramatic late winner in the Merseyside derby against Everton this season.

Klopp was just as animated at times on the sidelines when in charge of Borussia Dortmund but insists he has mellowed through the years.

Still, the German believes there are moments when he needs to motivate his team during matches, hoping that a few choice words – not always necessarily positive – will prompt a reaction on the field.

"There are two reasons why I'm so energetic on the sidelines," Klopp said in a video on the club's Twitter page. "One is my character, obviously. I’m already much calmer than I used to be, to be honest.

"I'm [also] kind of the reserve tank for the boys, when I feel the energy level goes a bit down, then I'm still there and can kick their butt, or whatever they need in that moment.

"It's better to be angry with me than to think, 'It's too intense today'. You always need something like a response, how I understand. I needed that as a player as well.

"The boys I think they are used to it by now, because if I give some credit or some compliments they look exactly the same way as when I shout something not so positive.

"That's my problem, with the face, but meanwhile they are used to it."

Jürgen Klopp offers unique insight into his view on the world, the importance of relationships, leadership and a drive to be successful.

Despite Klopp's encouragement, Liverpool missed out on the Premier League title, finishing a point behind champions Manchester City.

They may yet secure silverware in the 2018-19 campaign, though, thanks to a second consecutive appearance in the Champions League final, with Tottenham awaiting them in Madrid on June 1.

While Klopp has rightly received plenty of plaudits for his work at Anfield since taking charge in October 2015, he insists it is far from a one-man show.

"I know I’m good in a couple of things, really good at a few things, and that's enough," he said. "My confidence is big enough that I can really let people grow next to me.

"That's what leadership is; having strong people around you with better knowledge in different departments than yourself, don't act like you know everything – be ready to admit, 'I have no clue in the moment, give me a couple of minutes then I will have a clue'.

"That's not really philosophy, it's just my way of life."