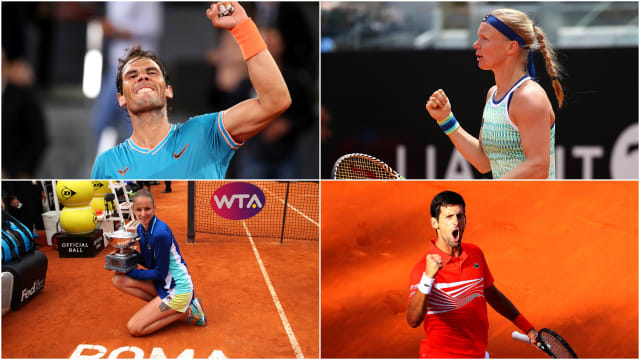 The world of tennis will descend upon Paris this weekend for the start of the French Open.

Novak Djokovic has an opportunity to become just the second man to hold all four major titles on two separate occasions at Roland Garros, but Rafael Nadal is always a leading contender for success on clay.

There is no clear-cut favourite in the women's draw, though Naomi Osaka can win a third straight grand slam and consequently match a feat only previous achieved by seven women in the Open Era.

Ahead of the tournament, three Omnisport writers put their necks on the line and share their picks for glory.

Halep will return to Paris seeking to become just the sixth woman to retain her crown at Roland Garros in the Open Era. The Romanian claimed her maiden grand slam title 12 months ago after beating Sloane Stephens in a three-set final and comes back as favourite despite a mixed start to 2019. She reached the final of the Madrid Open – losing to Kiki Bertens – but made a second-round exit a few days later in Rome. Halep has proved she has the game and the temperament to win on the biggest stage, though, and, in what appears a wide-open event, can be backed to emerge victorious once again.

Nadal's inconsistent clay-court performances in 2019 have given renewed hope to a pack forever in the slipstream of the relentless Spaniard. Nadal did edge out Djokovic in the Rome final, but the Serbian is unquestionably the most likely to capitalise should the draw open up. Djokovic's sole triumph at Roland Garros came in 2016 but the four-time finalist is in good form – a runner-up finish at the Foro Italico coming after victory in the Madrid Open.

Ones to watch: Belinda Bencic and Fabio Fognini

Bencic has re-emerged as a major player on the WTA Tour after a rankings slump caused by injury and a dramatic loss of form. The Swiss does not fear reputations, evidenced by her Rogers Cup success which saw her beat four top-10 players as a prodigiously talented 18-year-old in 2015. Having regained her mojo, Bencic beat world number one Naomi Osaka en route to the semi-finals of the Madrid Open in May. Now 15th in the world, she could go deep if the favourites falter.

Bencic's reputation as a dangerous floater on the women's side is matched on the men's by Fognini. The enigmatic Italian holds most matches on his racket depending on his mood. A woeful defeat to 101-ranked Jiri Vesely in his clay-court season opener in Marrakech in April was followed just a week later by victory at the Monte Carlo Masters – a run that saw him beat Nadal in the semis. Whether he can wake up on the right side of the bed every day for a fortnight in Paris remains to be seen, but he has the game to challenge the world's best.

Bertens made great strides last season and has gone from strength to strength this year. The 27-year-old from the Netherlands moved up to a career-high fourth in the rankings after beating French Open champion Halep in the final of the Madrid Open this month. Bertens also demonstrated her clay-court pedigree with runs to the last four in Stuttgart and Rome. She reached the semi-finals at Roland Garros three years ago and is much improved since then, packing a punch with her potent forehand and developing her all-round game to become a serious grand slam contender.

Nadal has not been as dominant as usual on clay this season, but normal service was resumed when he claimed a first title of the year in Rome. The 'King of Clay' struck a big psychological blow by defeating Djokovic at the Foro Italico to be crowned champion in the Eternal City for the ninth time. Court Philippe-Chatrier was knocked down after the legendary Spaniard lifted the Coupe des Mousquetaires for an 11th time last year and, fitness permitting, the world number two will take some stopping as he aims to demolish his rivals yet again at Roland Garros.

@RafaelNadal is making his final preparations ahead of @RolandGarros. @rnadalacademypic.twitter.com/Pn2vyp5gGW

Ones to watch: Sloane Stephens and Stefanos Tsitsipas

Stephens looked set to inflict more heartbreak on Halep last year before the Romanian came storming back to end her wait for an elusive major title. The 2017 US Open champion reached the quarter-finals and semi-finals in her first two clay-court tournaments of the season and is more than capable of banishing the memories of her defeat in the final 12 months ago.

Greek sensation Tsitsipas surged to a career-high sixth in the rankings after he was beaten by Nadal in the semi-finals in Rome following a loss to Djokovic in the final in Madrid. The fearless 20-year-old produced his best showing at a major when he reached the last four of the Australian Open in January and can ruffle more feathers on the red stuff in the French capital.

Despite starting the season with glory in Brisbane, Pliskova's season has been blighted by illness since she lost the Miami Open final to Ashleigh Barty in March. After disappointing displays in Stuttgart and Madrid, Pliskova became just the third player to win multiple WTA Tour titles this year with success at the Internazionali d'Italia. The Czech - a semi-finalist at Roland Garros in 2017 - may not have had to beat a single seed in Rome, but she is the form player heading to Paris and, with a strong record on clay in recent years, has a great opportunity to break her major duck.

Since Nadal lifted the Coupe des Mousquetaires for the first time in 2005, he has only failed to triumph at Roland Garros on three occasions. No man has dominated a single tournament in the Open Era, let alone a major, in the manner of Nadal at the French Open. Although his performances on clay this season have not been as impressive as in past years and he considers Djokovic to be the favourite for success in Paris, the world number two looks in decent shape to claim an unprecedented 12th title after his victory over the Serbian in Rome.

Ones to watch: Serena Williams and Dominic Thiem

It is a rare thing for Williams to head to a major as an outsider for success, but that is the case at the French Open. Margaret Court's all-time record of 24 grand slam triumphs continues to hang over her but the 37-year-old has made two major finals since her return from giving birth and the complications that followed in September 2017. A troublesome knee caused her to pull out of a second-round match against sister Venus in Rome, but she should not be overlooked as a contender for the Coupe Suzanne Lenglen.

Thiem has consistently proven a strong competitor on clay – all but four of his titles on the ATP Tour have been claimed on the surface. He scored a big win over Nadal en route to the trophy at the Barcelona Open in April and, although he fell to Fernando Verdasco in the second round in Rome, he has reached at least the semi-finals at Roland Garros in each of the past three years. The world number four will be keen to improve on his final defeat to Nadal last year and bring about his major breakthrough.

You're simply the best