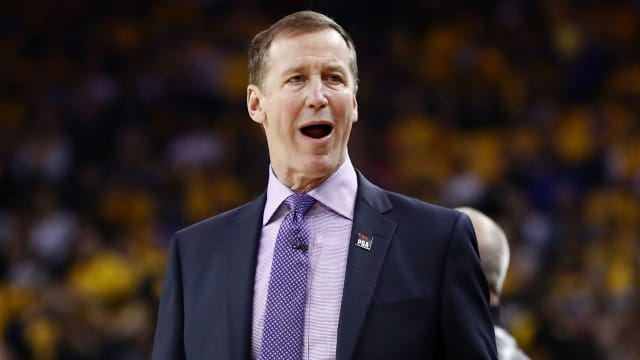 Terry Stotts received a multi-year contract extension with the Portland Trail Blazers in part because of his success developing young players.

News of the extension was revealed on Tuesday as the Blazers went through their exit interviews following the 4-0 series defeat to the Golden State Warriors in the Western Conference Finals.

Confirming the news, general manager Neil Olshey told reporters: "We win every year. But it goes beyond just wins and losses. It's alignment. It's partnership. It's knowing the organisation is moving forward.

"It's a commitment to a longer-term view, that there are priorities beyond just the next game.

"We still have one of the youngest rosters in the league. Every [player] who has come through here has gotten better. At heart, you're hiring a coach to be a teacher.

"As we see the league get younger, there's such a value placed — especially in a market like Portland, where we can't always buy our way out of trouble — on developing our young players and finding reclamation projects and developing them.

"I don't know that anybody has had as much success as this staff in second-round picks panning out, guys who have flamed out elsewhere becoming contributors and integral players. That consistency is important."

Until next season, #RipCity pic.twitter.com/M9ZtpqLzoE

Former Atlanta Hawks and Milwaukee Bucks coach Stotts took over the Blazers in 2012. They have made the playoffs in six of the last seven seasons and won 50 games or more three times.

"It was probably the most enjoyable year I've had as a head coach as far as the group of guys we had. We've gone through peaks and valleys over my tenure. This is another peak. I couldn't be more happy things have turned out the way we have.

"I never thought I was going to get another opportunity as a head coach. Neil plucked me out and gave me the opportunity. To be here seven years later is remarkable. I have a lot of gratitude for everyone who has helped make that possible."

The Trail Blazers are also expected to give All-Star point guard Damian Lillard a supermax extension this offseason, stretching out his deal to six years.