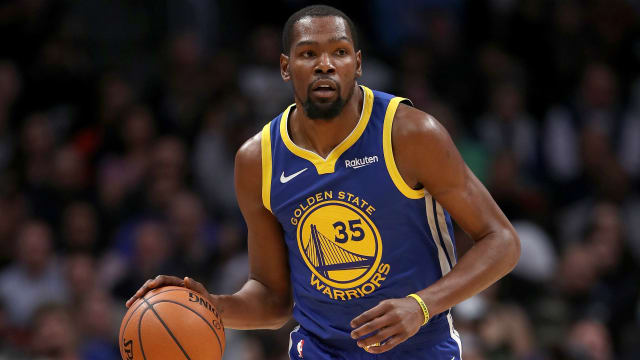 Durant is expected to become a free agent after the NBA season and the two-time champion has widely been linked to the New York Knicks.

But Durant's friend and former Oklahoma City Thunder team-mate Perkins believers the Clippers are a contender to add the 10-time All-Star and two-time NBA Finals MVP.

The New York Times also reported earlier this week the "Clippers have emerged as an equally dangerous threat to the Knicks to sign Durant away from Golden State".

Perkins, who played with Durant in Oklahoma City from 2011-15, said his former team-mate has been impressed by Clippers head coach Doc Rivers.

Rivers coached Perkins in Boston and the pair won a championship together with the Celtics in 2007-08.

"I don't need to help recruit [Durant to play for Rivers]," Perkins said. "He likes the organisation. He likes Doc Rivers. He loves Doc Rivers."

Durant has not played since straining his calf in Golden State's Game 5 win over the Houston Rockets in the Western Conference semi-finals.

The Warriors went on to close out Houston in six games before sweeping the Portland Trail Blazers in the Western Conference Finals.

Durant has averaged 26 points and 6.4 rebounds for the Warriors this season.

Two-time reigning champions Golden State will play the winner of the Eastern Conference Finals series between the Milwaukee Bucks and Toronto Raptors in the NBA Finals. The series is tied at 2-2 heading into Game 5 on Thursday.