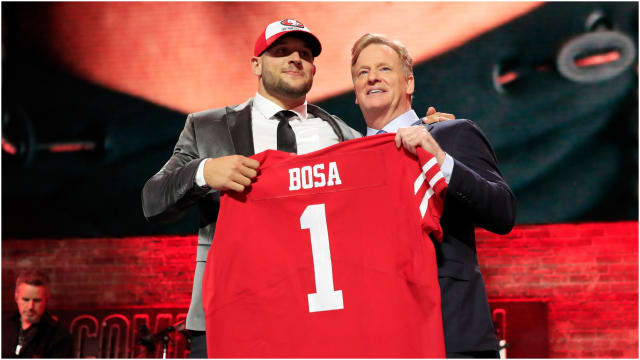 Nick Bosa, the second overall pick in the NFL Draft, tweaked his hamstring in practice for the San Francisco 49ers on Tuesday.

Coach Kyle Shanahan confirmed the injury occurred during one-on-one drills. While Bosa did not leave the field, he did not finish practice and walked with a limp following the incident.

"I know it was his hamstring, but I'm not sure of the severity of it," Shanahan said after practice concluded.

The former Ohio State defensive end entered 2018-19 as one of the top prospects in the country, but was sidelined with a core injury after playing just three games in his junior season.

Bosa underwent core muscle surgery following the injury and elected to withdraw from school following the operation to prepare for the draft rather than finish the season with the Buckeyes.

Bosa posted 17.5 career sacks in 29 games at Ohio State and will be crucial to the 49ers improving upon last season's 4-12 finish.

His fellow running back Jerick McKinnon is still recovering from a torn anterior cruciate ligament he suffered before the end of last season. When all are healthy the Niners should have a deep backfield, having signed Tevin Coleman to a two-year deal in free agency.

Jimmy G back at work! #GoNinerspic.twitter.com/rdRhmq2M8A

"Jimmy was threading it," cornerback Richard Sherman said. "He got the ball right where he wanted to.

"Obviously, he's been limited in the things that he can do, but he had a lot of reps, and he looked really good.

"He was putting the ball in some risky spots, where it seemed risky. It was real confident throws. He completed every single one of them."