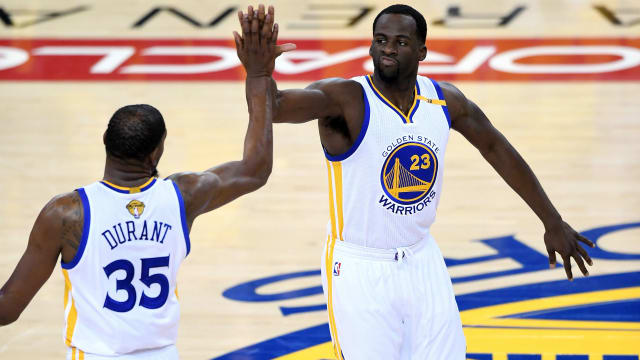 Golden State managed to complete a sweep of the Portland Trail Blazers in the Western Conference Finals even though Durant was sidelined with a calf strain.

Warriors center DeMarcus Cousins also missed the series as he continues to recover from a torn left quadriceps muscle.

But Green is eager for Durant to make his return, saying he made the Warriors unstoppable.

"There's been so much talk about how, 'Oh, they're the Warriors. Before Kevin got there, they were great.' Bull****," Green told ESPN.

"We was damn good. I think we were a very good team who was tough to beat. I think when Kevin came here, he made us unbeatable. When DeMarcus [Cousins] came here, it made people scratch their head even more.

“So, we need those guys. The next series is going to be tough, and I hope and pray that we can get [Durant] back."

For the fifth straight year, the Warriors are Western Conference Champions pic.twitter.com/J1sazWHJtk

Durant has not played since injuring his calf in Golden State's Game 5 win over the Houston Rockets in the second round.

The Warriors went on to close out Houston in six games before winning four straight against Portland. Andre Iguodala also missed Game 4 against the Trail Blazers with a leg injury.

"Our goal is obviously to get all three of those guys back," Green said.

"We know we're a good team with who we have, but those guys make us great and almost unbeatable. And we know we need [Durant]."

The Warriors will be playing for their third straight championship and fourth title in five seasons. Their lone finals loss during that stretch came to the Cleveland Cavaliers in seven games in 2015-16. Durant left the Oklahoma City Thunder and signed with Golden State that offseason.

Golden State will face the winner of the series between the Milwaukee Bucks and Toronto Raptors for the title.