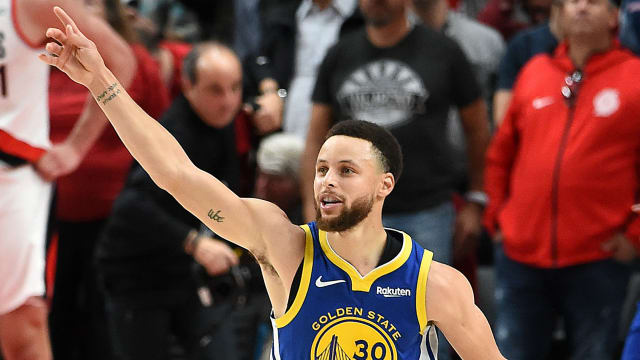 The Golden State Warriors are back in the NBA Finals for the fifth successive season at the expense of the Portland Trail Blazers.

Golden State completed a 4-0 sweep of the Trail Blazers in the Western Conference Finals with a 119-117 overtime win in Game 4.

Leonard the X-factor nobody was ready for

Portland's Meyers Leonard had a career night against the Warriors.

The seventh-year center poured in 25 first-half points, which is more than he has ever scored in a game in the NBA or college. He finished with a team-high 30 points, 12 rebounds and knocked down five three-pointers in the contest.

Leonard's insertion into the starting line-up was essential to stretching Golden State's defense out, but it was not enough to prolong the series.

Curry has continued to step it up

Stephen Curry is on a roll.

The Warriors star has scored at least 30 points in his last five playoff games, but he took things up a notch on Monday, recording a triple-double.

Curry finished with 37 points, 13 rebounds and 11 assists in Golden State's win, while team-mate Draymond Green tallied a triple-double of his own.

The Dubs are the first team since the 1960's Celtics (1959-1966) to advance to five straight #NBAFinals pic.twitter.com/JFLquOlB51

Two-time MVP Curry has been re-asserting his dominance as of late, which is a great sign for the Warriors – who have been playing without injured star Kevin Durant.

Curry did not sit for a single second after half-time on the road.

The Warriors took control of the rebounding battle, beating the Trail Blazers on the boards 56-38.

The Warriors will now await the winner of the Eastern Conference Finals series between the Milwaukee Bucks and Toronto Raptors. Milwaukee enter Tuesday's Game 4 with a 2-1 series lead.