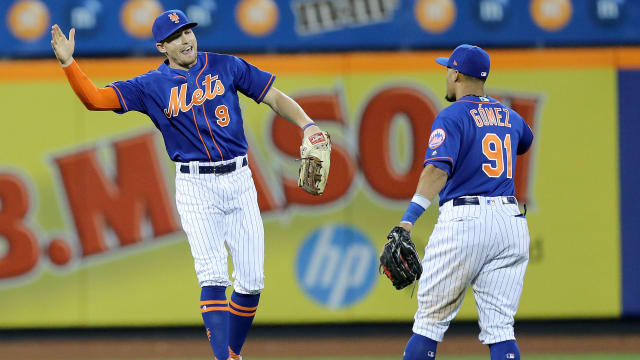 The New York Mets five-game losing streak came to an end after defeating the Washington Nationals 5-3 in MLB.

New York scored four runs in the first three innings to take a lead they would never relinquish against Washington on Monday.

It was a nice distraction from earlier headlines, which included questions surrounding manager Mickey Callaway's job and a non-baseball related injury to Yoenis Cespedes.

"Whatever happens, happens. You can't live in the yesterday. It's all about what you can do today," Mets star Pete Alonso told reporters after the game.

"Baseball, it's a funny game but sometimes you've just got to roll with the punches and when you get knocked down you've got to come back and fight and be ready to go tomorrow. There's a lot of games and we just need to keep winning and get back on track. Tonight was a good start."

Alonso helped start the scoring early with a home run in the first inning. Amed Rosario, Todd Frazier and Carlos Gomez also pitched in with RBIs to help build the Mets' lead.

Washington attempted a late rally when Juan Soto delivered an RBI single in the eighth but he was left stranded at the end of the frame. New York added an insurance run in the bottom of the inning.

Drew Gagnon was given the win and Edwin Diaz earned the save. Nationals starter Patrick Corbin was tagged with the loss.

Texas Rangers pitcher Mike Minor set a new team record as he reached 29 consecutive scoreless innings as the team edged the Seattle Mariners 10-9. It is the longest streak in franchise history.

David Price returned from the injured list and did not allow any earned runs in the Boston Red Sox's 12-2 win over his former team the Toronto Blue Jays.

Leury Garcia, Yoan Moncada and Eloy Jimenez could not get anything going against the Houston Astros. All three players went 0 for four in the Chicago White Sox's 3-0 loss.

Anthony Rizzo tried to outrun a Bryce Harper throw and it did not end well for the Chicago Cubs first baseman as his team lost 5-4 to the Philadelphia Phillies.

.@ronaldacunajr24 settles in for the first pitch …

The Mariners are looking for revenge against the Rangers and to also climb out of the bottom of the American League West. Seattle will start Tommy Milone and Texas will send Lance Lynn (5-3, 4.94 ERA) to the mound.