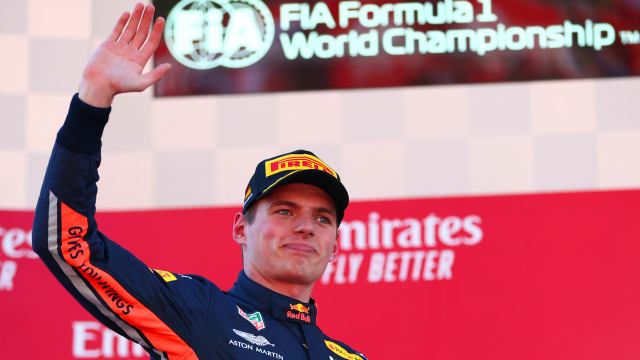 That is how Max Verstappen has described the Monaco Grand Prix, where many Formula One fans are hoping he can be the man to finally halt Mercedes' emphatic start to 2019.

Even a team with the confidence and recent winning pedigree of Mercedes would not have expected such success over the opening five races, where they have recorded a one-two finish every time.

Already the best start to a F1 season, if they can make it six in a row this weekend it will be the best streak ever at any point of a campaign. There is even speculation they could win all 21 races this year, a view dismissed as premature by Ferrari's Mattia Binotto after the Spanish Grand Prix.

Supporters of Ferrari and Red Bull are pinning their hopes on the fact Monaco is a track where Mercedes, despite their dominance, have not won in the last two seasons. At no track do they have a worse run.

Red Bull won last year's race through Daniel Ricciardo – now with Renault – and have always had a car that makes them competitive at street circuits like Monte Carlo, which is the shortest track on the calendar.

Four different drivers have won the last four Monaco GPs, with Verstappen a strong candidate to make it five in five after a superb start to the campaign that has seen him finish every race in either third or fourth position.

It might look like glitz and glamour on the outskirts but on track it's pure grit! #MonacoGP#F1pic.twitter.com/Jk8A8xlh5e

Red Bull boss Christian Horner explained the Dutchman is eyeing "redemption" after last year, when having looked like the fastest driver before a qualifying smash left him at the back of the grid, after which he recovered to finish ninth and record the fastest lap.

"It was great to be back on the podium in Barcelona and now I'm looking forward to Monaco," said Verstappen.

"It's a very special and hectic weekend, and for sure it’s a lot of fun. It has a lot of history but it’s not been the best one for me over the last few years.

"Hopefully it's time to turn this around. I live in Monaco so it's nice to sleep in my own apartment instead of a hotel, and a few of my friends and family will be there so I’m looking forward to seeing them and having a good weekend."

But Horner has expressed concern at how fast the relentless Mercedes looked during the slowest sections of the track in Barcelona last time out.

And Mercedes' Toto Wolff is hopeful changes to his team's development of the 2019 car has made up the performance difference they lacked in years past at slower tracks, which could enable them to end their Monaco slump.

The weekend will be a poignant one as it is the first race since the death of legendary driver Niki Lauda, who passed away on Tuesday.

Lauda, who was 70, remained a prominent figure with Mercedes as their non-executive chairman, with the team earning incredible results since his arrival in 2012.

He drove for Ferrari and McLaren among others in a career that saw the Austrian win three world titles.

Mercedes team boss Wolff said: "Niki will always remain one of the greatest legends of our sport - he combined heroism, humanity and honesty inside and outside the cockpit.

"His passing leaves a void. We haven't just lost a hero who staged the most remarkable comeback ever seen [after his famous 1976 crash], but also a man who brought precious clarity and candour to modern Formula One. He will be greatly missed as our voice of common sense.

"Our Mercedes team has also lost a guiding light. As a team-mate over the past six-and-a-half years, Niki was always brutally honest - and utterly loyal. It was a privilege to count him among our team and moving to witness just how much it meant to him to be part of the team's success. Niki, you are quite simply irreplaceable."

Shocked by the loss of Niki Lauda. He was a true legend in our sport and someone I had great respect for. May he rest in peace #RIPNikipic.twitter.com/NCCduqNQuU

Red Bull have collected 272 points at Monte Carlo, their most at a single F1 circuit.