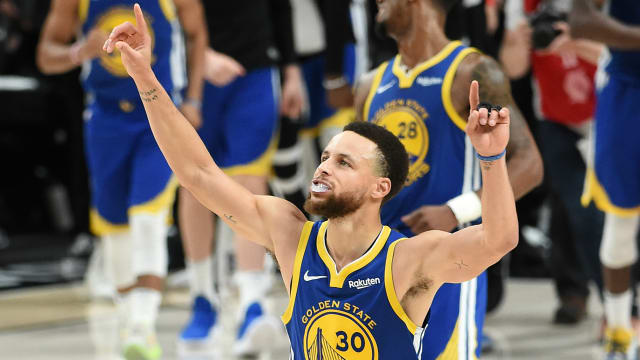 Steve Kerr hopes the Golden State Warriors' fifth consecutive NBA Finals appearance does not go "unnoticed or underrated" as he emphasised the difficultly of the achievement.

With Monday's victory in Portland, the Warriors became the first team since the Boston Celtics in 1966 to reach five successive finals, and head coach Kerr hailed the feat.

"I hope it doesn't go unnoticed or underrated," Kerr told reporters. "Five straight finals hasn't been done since the 60s, since Bill Russell's Celtics. It hasn't been done for a reason: It's really, really difficult.

"I just can't say enough about the competitive desire of the group of players that we have here and the culture that they have built together. Playing together regardless of injury. Being without Kevin [Durant] these last five games has put us in a really tough spot and our guys stepped up in a big way.

"A couple years back, we were without Steph [Curry] for over a two-year period, I think he missed like 12 playoff games we won nine of them. So, the group has a fibre to them; where guys go down, they find a way to come together and compete and win.

"It starts defensively. If you can defend at a high level in the playoffs, you always have a chance. But I just think the experience of winning titles helps you in these moments and it helps you continue to move forward and come away with victories like tonight."

The Dubs swept the Trail Blazers in the Western Conference Finals, earning them their fifth-consecutive #NBAFinals appearance.@verizon has it all in tonight's Game Rewind pic.twitter.com/BD6JTemu7y

It was a historic night for the Warriors as Stephen Curry and Draymond Green became the first team-mates in playoff history to both record triple-doubles in the same game.

"They have been playing pick-and-roll together for five years, more than that, seven years and Draymond is an amazing playmaker and Steph is so lethal, he's going to draw a lot of attention," Kerr added.

"They have a lot of knack for working the pick-and-roll together, finding openings and then attacking. They are both great passers, as well.

"They are fun to watch. They are kind of made for each other from a basketball standpoint. You know, they have been doing this for a long time, so they have got a real feel for each other."