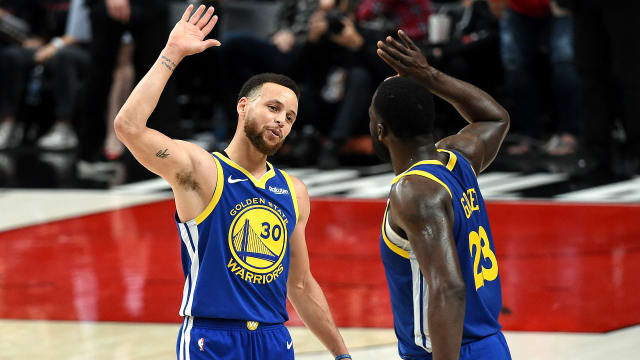 Curry and Green made history as two-time reigning champions the Warriors swept the Portland Trail Blazers to reach the NBA Finals on Monday.

Warriors star Curry posted 37 points, 13 rebounds and 11 assists in Portland, where the Warriors outlasted the Trail Blazers 119-117 in overtime of the Game 4 Western Conference Finals clash.

Green, meanwhile, had 18 points, 14 rebounds and 11 assists. He made an impact defensively too, chipping in three steals and two blocks.

Steph and Draymond become the first pair of teammates in #NBAPlayoffs history to each record a triple-double in the same game. pic.twitter.com/dFvxagjbdu

With the win, the Warriors advanced to their fifth successive NBA Finals. Golden State are just the second team in history to play in five consecutive Finals.

The Warriors will face the winner of the Eastern Conference Finals series between the Milwaukee Bucks and Toronto Raptors.