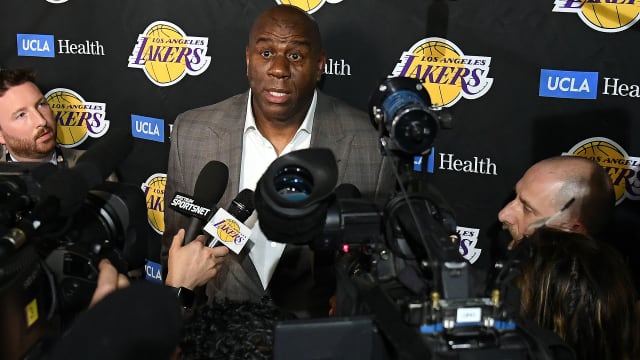 Magic Johnson revealed how an erosion of his power, plus the breakdown of his relationship with general manager Rob Pelinka, led to him leaving his role with the Los Angeles Lakers.

Johnson, a franchise legend having helped them win five NBA titles during his playing career, abruptly resigned as the team's president of basketball operations in April.

He said during an impromptu media conference at the time he was tired of the "backstabbing", something he explained in greater detail during an appearance on ESPN's First Take show on Monday.

Johnson identified Pelinka as the individual he was referring to, divulging how agents had called him to warn him about the Lakers' general manager, though he decided to give him a "fair shot".

"I started hearing, 'Magic's not working hard enough', 'Magic’s not in the office'. People around the Laker office were telling me Rob was saying things and I didn't like those things being said behind my back," he explained.

Despite the presence of LeBron James, the Lakers posted a 37-45 record as they finished 10th in the Western Conference.

With turmoil – and losses – mounting this season, Johnson said he reached a point where he felt the team needed to go in a different direction, leading to a situation with then-coach Luke Walton that he described as "the straw that broke the camel's back".

"I wanted to fire Luke Walton," he said. "We had three meetings. I showed [controlling owner Jeanie Buss] the things he did well and then the things he didn't do well. I said, 'Listen we got to get a better coach'. I like him, he's great, former Laker, the whole thing.

"So when we went back and forth like that and then she brought [Lakers chief operating officer] Tim Harris to the meeting ...and Tim wanted to keep him because he's friends with Luke. Luke's a great guy, great guy. So when I looked up I said, 'Wait a minute'. I only really answer to Jeanie Buss and now I've got Tim involved. I said, 'It's time for me to go'.

After Johnson's sudden departure, the Lakers announced they would not fill the team president role. Walton, meanwhile, was fired after the team missed out on the playoffs.