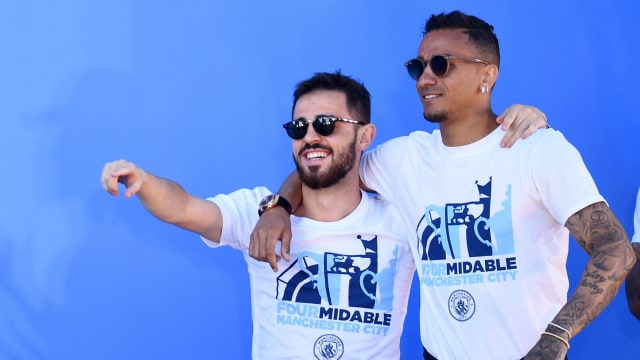 Bernardo Silva vowed to "go for" the Champions League after being named Manchester City's Player of the Season at the club's trophy parade on Monday.

Silva enjoyed a fine campaign, nailing down a spot in the starting spot despite Riyad Mahrez's arrival and excelling in a number of different roles.

The Portuguese midfielder's haul of seven goals in the Premier League helped City retain the title, while they also claimed the EFL Cup and FA Cup, the latter of which they won in a 6-0 hammering of Watford on Saturday.

City announced Silva had topped a fan vote for the individual honour during Monday's celebrations, with the winner declaring his intention to help secure European success next term.

"Thank you very much everyone," he said. "The way you pushed us this season. You made it real for us. Without them [the fans], it wouldn't be possible. Next season, we'll come back, trying to give you more titles.

"A lot of hard work has been put in. We're very tired! It's been a long season, a fantastic season for us, but with four trophies [the Premier League, EFL Cup, FA Cup and Community Shield] for all squad and staff, it's been amazing.

"Hopefully, we want to do better, try and go for European trophies as well - it's what we're missing.

"The supporters need to demand more from us. European trophies - we need that. Let’s go for it."