Anderson stars for Lancashire on return from injury 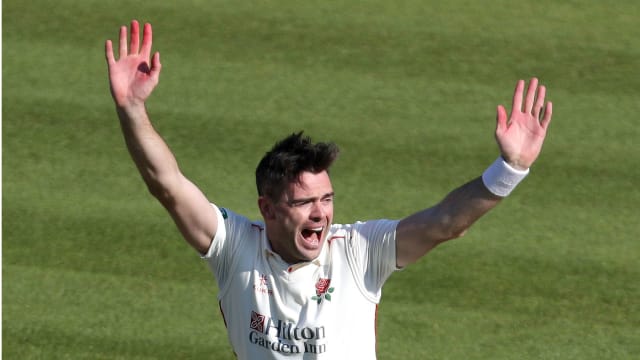 James Anderson was happy to come through a "good test" for his bruised knee after starring for Lancashire against Worcestershire.

Anderson is not involved in England's World Cup squad but is expected to lead the attack in the Ashes series against Australia later in the year.

However, the seamer gave cause for concern after he was forced off during Lancashire's Royal London One-Day Cup semi-final loss against Hampshire on May 12 when a shot from James Fuller hit him in the knee.

Anderson showed no signs of any lasting damage on Monday, though, taking a five-wicket haul at the start of the County Championship fixture.

Lancashire limited the visitors to just 172 on the opening day of the Division Two clash at Old Trafford, and the 36-year-old was delighted to come through unscathed after starting out with a 12-over spell.

Not a bad way to return from injury.

"It was a good test for the bruised knee," Anderson told Lancashire's official website.

"I enjoyed that first partnership with Graham [Onions] (3-52) at the other end. I thought we asked a lot of questions and got the rewards towards the end of the spell.

"But I probably wouldn't want a 12-over spell every time I open the bowling! Today was one of those days where you get into a rhythm and get on a roll and it was right I kept going."