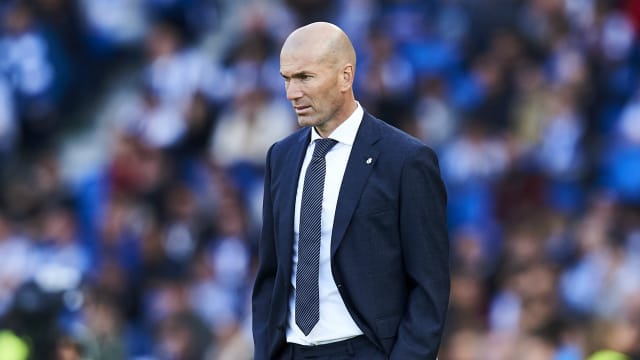 Zinedine Zidane conceded Gareth Bale and Keylor Navas face uncertain futures at Real Madrid as he vowed to improve upon a dismal season following a 2-0 home loss to Real Betis.

Sunday's match was billed as a final farewell for a handful of players as Madrid prepare for an end-of-season clear out.

Goalkeeper Navas was given the full 90 minutes against Betis, but Bale was an unused substitute on his return to the squad following a two-match absence.

And Zidane admits he will not hold back when it comes to offloading players, regardless of their status.

"We will see [if Bale continues]. I don't know what will happen, truthfully," he said at his post-match news conference. "I have counted on other players lately, that is clear for my part. If I had another change today, the same would have happened.

"I have to look at the day to day, and make decisions. And when there is something I do not like, or does not fit for me, I must do what I think best. It might be difficult for the player, who has won a lot here, but the day to day is the day to day.

"I am the coach that I am, with my ideas, and that will not change. The only thing for us is that we want to change things in the squad, and we will do that.

"I don't know what will happen, I am repeating myself, sorry, but I don't know. Keylor played well today, the fans were happy, that's all. Next year, we will see when we come back here."

Following the disappointing short tenures of Julen Lopetegui and Santiago Solari, Madrid reappointed Zidane in March just 10 months after he stepped down.

But despite the three-time Champions League-winning coach's return to the Santiago Bernabeu, he could not inspire a turnaround in results.

The final-day defeat to Betis leaves Zidane with a record of five wins, two draws and four losses in 11 games in his second spell in charge, and the Frenchman admits he has to accept part of the blame.

"We have no excuses. After many games we had to apologise as we have responsibility to at least give everything," he added. "It has been difficult from the start of the season, and the end with me, that is the reality.

"The best thing that can happen for us is to have it over now and to think about next year as this will change, for sure.

"I always say the same - we must accept when things go bad. I am responsible for this. We had 11 games and in the end that is what it is."

Madrid's final tally of 68 points is their lowest in LaLiga since 2001-02 and they also fell short in the Champions League and Copa del Rey.

"It is not the first bad year in the history of this club," Zidane said. "And after the bad, comes the good. But we must not forget this season, we must have it very present to prepare the next one.

"We must think now about next year, and exciting our fans again. We are going to prepare the pre-season very well. We will not say that we will win everything next year, but we will compete from the first moment, and be up there battling with the others."

Second-half goals from Loren Moron and ex-Madrid man Jese were enough for Betis to claim back-to-back wins at the Bernabeu, giving Quique Setien the perfect send-off as his departure was announced after the game.