Warriors on verge of NBA Finals after trumping Trail Blazers 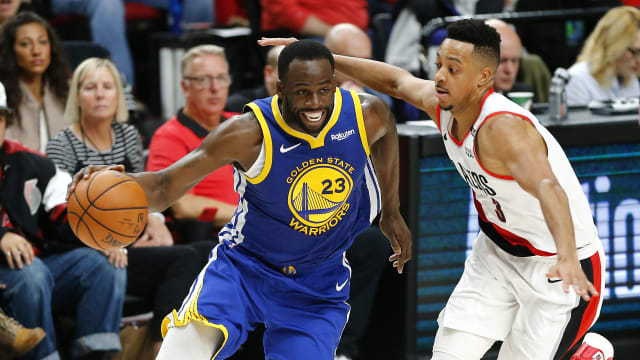 Two-time reigning champions the Golden State Warriors are one win away from the NBA Finals after defeating the Portland Trail Blazers 110-99 on Saturday.

Golden State used a Draymond Green triple-double and a third-quarter comeback to top the Trail Blazers in Portland for a commanding 3-0 lead in the Western Conference finals.

After trailing by 13 points at half-time in Game 3, the Warriors outscored the Trail Blazers 29-13 in the third quarter to take a lead into the final frame they would never relinquish.

Over the last two games, Golden State – playing without injured star Kevin Durant due to a calf strain – have outscored Portland 68-39 and erased double-digit deficits in each of those outings.

Draymond gets it to go #BeforeTheLightpic.twitter.com/hppJT831XJ

The Trail Blazers' free-throw shooting absolutely destroyed their chances down the stretch as they missed 13 free throws in the clash.

The Trail Blazers face elimination when they host the Warriors again in Game 4 on Monday.