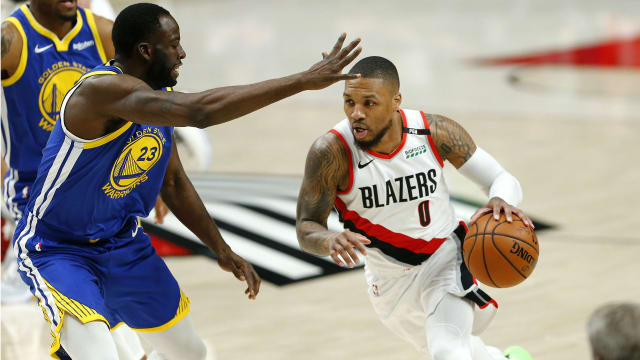 Portland Trail Blazers star Damian Lillard is not worried about his injury.

Lillard, who has been playing through a separated rib on his left side against the Golden State Warriors in the Western Conference finals, told reporters on Sunday he feels "fine".

"I don't think it's something that's affecting my game," Lillard told reporters.

"Not really [limiting], just the pain from having a separated rib. There's nothing you can really do about it. Just when I get winded, it's a little harder to breathe. Contact, when you're in there banging with guys, just normal stuff."

Lillard appeared to suffer the injury when he collided with Kevon Looney in the third quarter of Game 2.

The 28-year-old star has knocked down just 32.9 per cent of his field-goal attempts and turned the ball over 14 times in the series against the Warriors.

"There's not much you can do to increase my level of respect for him," backcourt partner CJ McCollum said.

"I understand who he is as a person to the core, so it's an unfortunate situation and injury to have to fight through, but he's a strong person, and understanding what's at stake.

"There’s not much he can do to increase my level of respect for him. I understand who he is as a person to the core." - CJ on Dame #RipCitypic.twitter.com/5UlWygh6lJ

"We're in the playoffs right now, so there's no excuses and there's no way I feel like he can sit out of a game or anything of that nature. So, we've just got to keep pushing forward, and as I said, we can rest in the summer."

The Trail Blazers held double-digit half-time leads in each of the past two games. But, the Warriors rallied and came away with wins in both of those matchups to take a 3-0 advantage.

"You look at the numbers and there's a slim chance of you winning the series like that, but we've got a lot to play for," Lillard said.

"Obviously you never know when the first time it's going to happen, we could be the first team to do it. Also, you don't want to go out being swept in the Western Conference finals. Pride, being competitors, being professionals, we've got a lot to play for. We're not ready to just go out there and say, 'Oh, we did our best, we had a great season.' We've got a lot to play for."

Game 4 between the Warriors and Trail Blazers is on Monday.