Kompany thanks Guardiola and Manchester City team-mates after announcing departure 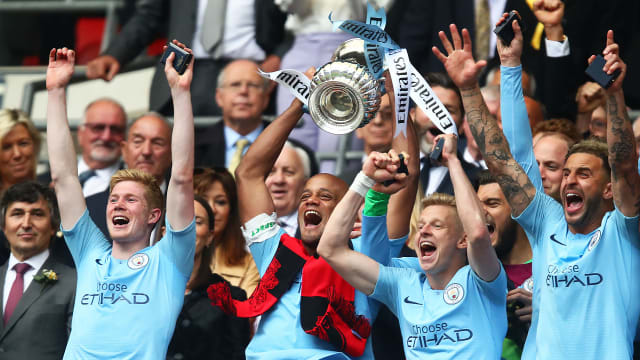 Vincent Kompany has thanked Pep Guardiola and Manchester City team-mates past and present after it was confirmed he will be leaving the Premier League champions.

Kompany led City to a remarkable domestic treble this season, but the 33-year-old announced on Sunday that his appearance in the 6-0 FA Cup final win over Watford would be his last for the club, ending an 11-year stay.

Guardiola suggested in the build up to Saturday's game at Wembley that he would sit down to discuss Kompany's future at the end of the season.

Injuries have limited Kompany's game time over recent years, with the Belgian playing 26 times in all competitions for Guardiola's team in 2018-19.

He still made a crucial contribution, however, playing in City's final four league games and the FA Cup final, scoring a sublime strike to earn a 1-0 win over Leicester City in the penultimate match of the campaign as Liverpool were pipped to the title by a point.

The defender labelled City as "the best team in the world" following the Wembley rout of Watford, and in an open letter released on his official Facebook page, Kompany credited Guardiola and his staff for standing by him during his injury troubles.

"My 11th as a Blue. And I cannot believe I'm writing this but... also my last as a Blue. Countless times have I imagined this day, after all, the end has felt nearby for so many years.

"It's cliche to say it but it's also so true: without my team-mates I would have never been here today.

"We fought many battles together. Side by side. In good times and in bad. So to all of you, from the 2008-2009 squad to today's domestic treble winners: I owe you guys!

"A special word also to Pep and the backroom staff: you've been superb. You've followed me through so much hardship. You made me come back stronger every time. Thank you so much.

"It still doesn’t feel real. Man City has given me everything. I've tried to give back as much as I possibly could. How often does someone get the chance to end such an important chapter, representing a club with such great history and tradition, in such a great fashion?"

1 - Manchester City have become the first men’s team to win the domestic treble in England, winning the Premier League, FA Cup and League Cup all in 2018-19. History. #MCIWAT#facupfinalpic.twitter.com/OB8OloqGUx

Kompany made 360 appearances for City after joining from Anderlecht in 2008, and counts four Premier League titles, two FA Cups, four League Cups and two Community Shields among his honours.

Having scored a memorable goal over Manchester United in April 2012 to help City - then managed by Roberto Mancini - to their first Premier League triumph, Kompany then made 28 league appearances when the club regained the crown in 2013-14, scoring four times.

And Kompany believes that the club are in good hands for the foreseeable future, as they aim to repeat their domestic dominance as well as go further in the Champions League after back-to-back quarter-final defeats.

"Sheikh Mansour changed my life and that of all the City fans around the world, for that I am forever grateful. A blue nation has arisen and challenged the established order of things, I find that awesome," Kompany wrote.

"I cherish the counsel and leadership of a good human being, [City chairman] Khaldoon Al Mubarak. Man City could not be in better hands."