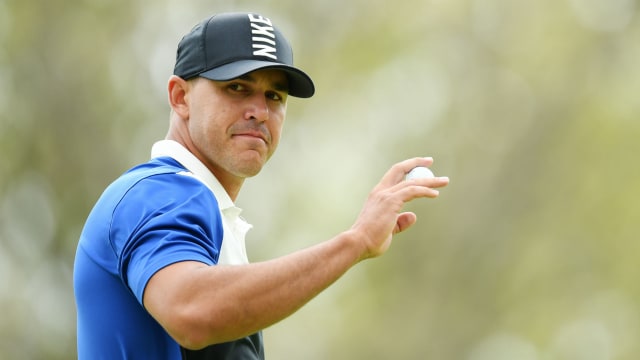 Brooks Koepka retained his US PGA Championship title in dramatic fashion, triumphing by two strokes from Dustin Johnson after a stunning back-nine collapse at Bethpage Black.

Having been six clear with eight holes to play, Koepka paid the price for a succession of wild tee shots as he bogeyed the 11th, 12th, 13th and 14th amid rising winds, cutting his advantage to a solitary stroke with Johnson having birdied the 15th up ahead.

However, Johnson then wobbled himself, dropping shots at the 16th and 17th to significantly ease the pressure on his fellow American on Sunday.

And although Koepka made yet another bogey on the penultimate hole before finding trouble off the 18th tee, a closing par ensured he became the first man to retain both the Wanamaker Trophy and the U.S. Open, which he will seek to defend at Pebble Beach next month.

Koepka finished the week at eight under after a closing 74. Now firmly established as the dominant figure in golf, the new world number one's last five major appearances have yielded three wins and a second-place finish at last month's Masters. In addition, his haul of four major victories is bettered only by Phil Mickelson (5) and Tiger Woods (15) among active players.

@BKoepka has won the PGA Championship!

It's his 4th major victory in 8 starts.#LiveUnderParpic.twitter.com/SlDUVQRTDa

He is only the fifth man to complete a wire-to-wire victory in the PGA Championship and the first since Hal Sutton in 1983.

Johnson, who went round in 69 to ensure he broke par in every round, has now finished second in all four majors, while Jordan Spieth shared third with Patrick Cantlay and Matt Wallace at two under to claim his first top-10 finish since last year's Open Championship. Luke List, one under for the week, was the only other player to break par.