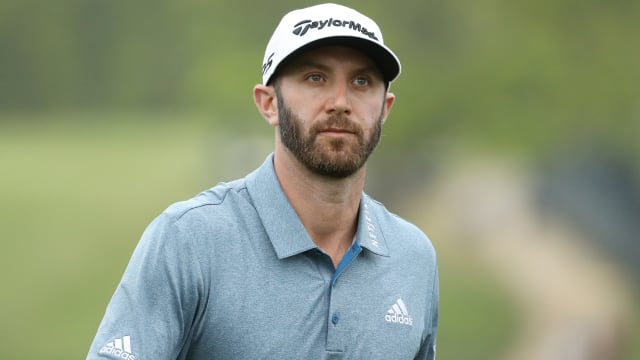 Dustin Johnson was happy with his US PGA Championship performance despite falling short of catching Brooks Koepka.

Johnson pushed Koepka, whose seven-stroke overnight lead was briefly cut to one by the 2016 U.S. Open champion on Sunday.

However, bogeys at 16 and 17 saw Johnson fall short, finishing at six under and two shots behind as Koepka retained his title.

But Johnson was still upbeat about his performance after shooting four under-par rounds.

"I'm very pleased with the way I played. I feel like my game's been pretty good all year. This week, especially, I felt like I really, really played well tee-to-green," he told a news conference.

"Today I felt like I rolled the putter a lot better. In these tough conditions, tough wind, even the putts that I missed looked like they were going in. Hit the ball really well again today, too.

A strong finish by DJ. #PGAChamppic.twitter.com/IZJSa8un4T

"So I'm pleased with where the game's at, especially we've still got a lot of big tournaments left this year. I'm very happy with that."

Still, it was something of a missed opportunity for Johnson, who bogeyed the par-four 16th and the par-three 17th.

The 34-year-old said he was trying to ignore the fanfare as Koepka's back-nine collapse – he bogeyed five of seven holes – created a thrilling finish at Bethpage Black.

"I was really trying not to pay attention too much because it was so difficult out there. I know anything can happen," Johnson said.

"But I looked at the leaderboard on maybe nine, or I was on 12 tee, maybe I saw it. There's a leaderboard right there, and I think he was at 12 under making the turn.

"And so you know, I knew I needed to play well finishing, but yeah, I gave it a run. That's all you can ask for."