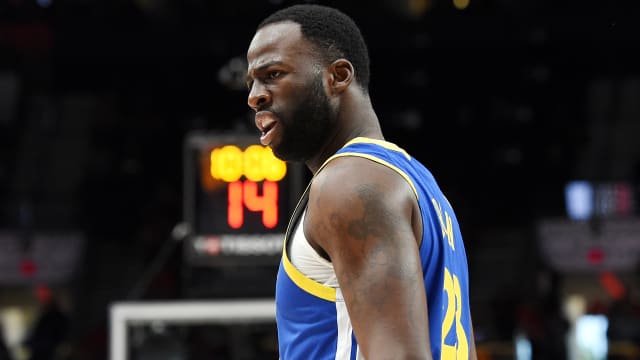 Green posted a triple-double of 20 points, 13 rebounds and 12 assists in the Warriors' 110-99 win over the Portland Trail Blazers on Saturday.

The Warriors moved into a 3-0 lead in the Western Conference finals, putting them a win away from reaching a fifth straight NBA Finals.

Kerr was full of praise for Green, who is a three-time NBA All-Star.

"He's done so much here, it's hard to look back and say what's the best, what's his best stretch," he told a news conference.

"He's not letting anything bother him – officiating, bad shots, turnovers, he's just moving on to the next play. So from that standpoint, as good as he's ever been."

@Money23Green (20 PTS, 13 REB, 12 AST) posts his 7th career #NBAPlayoffs triple-double and the @warriors storm back to go up 3-0! #StrengthInNumbers

The Warriors are in control of the Western Conference finals despite being without Kevin Durant throughout the series due to the star's calf injury.

Kerr believes the absence of Durant may be helping Green by giving the 29-year-old more opportunities.

"I think the biggest thing is he has the ball in his hands a lot more. With Kevin out, he's a guy who was averaging 34-35 points a game in the playoffs when he went out. I think the best player in the NBA right now, Kevin Durant," he said.

"So Kevin obviously is going to have the ball in his hands an awful lot. He goes down and all of a sudden that changes the responsibility of a few different players.

"It provides more opportunities for the bench, but it puts the ball in Draymond's hands a lot more."