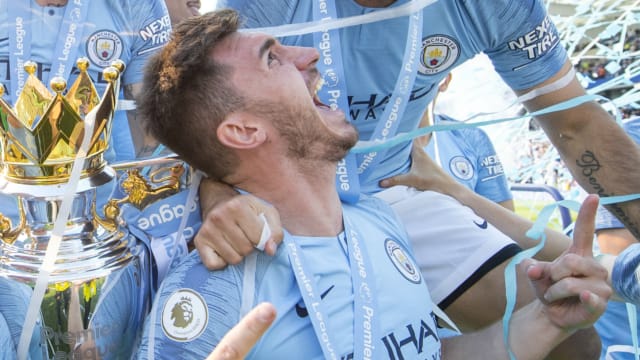 Aymeric Laporte said Manchester City are aiming to "stay on the top always" after completing a historic treble of domestic trophies in his first full season at the club.

The former Athletic Bilbao stopper, who City paid a reported €65million for in January 2018, featured in all but four of Pep Guardiola's starting line-ups in the Premier League in 2018-19 and played again in the 6-0 FA Cup final victory over Watford.

After celebrating the treble at Wembley, Laporte outlined City's vision for next season and underlined his belief in their ability to improve their performance in the Champions League and sustain their success long into the future.

"It has been a great season," said Laporte, who played in City's Champions League quarter-final defeat to Tottenham in April.

"We were disappointed with the Champions League but I think we reacted really well and made an amazing season.

"This [the FA Cup]  is the last one and I'm very happy to win it too. Now we will look ahead to the new season.

"Of course we want to stay on the top always. We have the team to do these things.

"I think we're going to be on the top all the seasons but we know other teams play too and it's difficult to win the Premier League.

"We have the players and we will try to do that."

Laporte shed light on the experience of working with Guardiola, who was seen having an animated conversation with Raheem Sterling after the forward scored a brace against Watford.

France youth international Laporte signed a new contract in February, tying him to the club until 2025, and he indicated that working under former Barcelona midfielder Guardiola was key to his happiness at the Etihad Stadium.

"Of course he's one of the best managers in the world, if not the best," said Laporte.

"I'm very happy to work with him every single day and improve every day, and what you saw is true - he wants the best for us and wants us to improve all the time.

"It's amazing every day with him. I've improved in my positioning, tactically.

"Every day you train on tactics, technical [elements]."